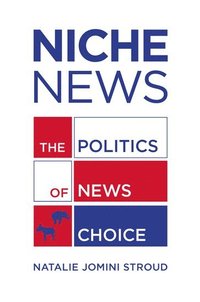 The Politics of News Choice

Doris A. Graber, Professor of Political Science, University of Illinois-Chicago American news media and their audiences were proudly partisan during the nation's first century. A long period of nonpartisan news followed. Stroud's richly documented study demonstrates that we have come full circle. An influential partisan press has been reborn, making it easy for audiences to select congenial news only. This intriguing and insightful book explains the profound consequences for the future of American democracy. It's message deserves serious
attention.


Scott L. Althaus, Associate Professor of Communication and Political Science, University of Illinois, Urbana-Champaign A previous generation of scholars concluded that the evidence for selective exposure was uncertain, but Niche News begs to differ. Using a compelling mix of experiments, surveys, and content analysis, Stroud confirms that political partisans increasingly tend to seek out information that comports with their beliefs. Selective exposure is back, and Niche News shows why it matters.


Kevin Arceneaux, Political Communiation Stroud's book offers an incisive and useful voice to the scholarly discussion about the extent and effects of partisan selectivity. She offers compelling evidence that partisan selectivity exists and is an important force in media politics. She also brings the path forward into focus. She opens her last chapter by noting, 'There are undoubtedly people who opt out of politics and avoid news media content altogether. And not everyone who seeks out political information
from the media gravitates toward news sharing their political perspective' (p. 169). If we wish to come to grips with the seismic changes in media over the past decade, we must next tackle these aspects of the hyperchoice media environment. Thankfully, Stroud has made our work easier.


D. Caristi, Associate Professor of Telecommunications, Ball State University Stroud makes a convincing argument that there are both positive and negative aspects to polarized political news reporting. Using primarily quantitative data, the author reveals how audiences use selective exposure, perception, and retention in their news-media choices and political arguments.


CHOICE Stroud makes a convincing argument that there are both positive and negative aspects to polarized political news reporting... Stroud's work points out the leanings by both ends of the political spectrum. She calls for a media landscape that includes both partisan and nonpartisan media.

<br>Natalie Jomini Stroud is Assistant Professor in the Department of Communication Studies and Assistant Director of the Annette Strauss Institute for Civic Participation at the University of Texas-Austin.<br>