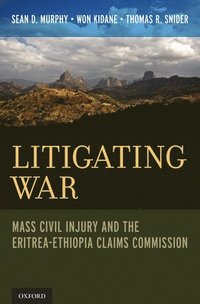 av Sean D Murphy
Inbunden Engelska, 2013-05-23
3814
Köp
Spara som favorit
Finns även som
Visa alla 2 format & utgåvor
Litigating War offers an in-depth examination of the Claims Commission of the Eritrea-Ethiopia War, which was tasked with deciding, through binding arbitration, claims for losses, damages, and injuries resulting from the war. After providing an overview of the war, the authors describe how the Commission was established, the extent of its jurisdiction, and the applicable law on which it relied.
Visa hela texten

"This wonderful book offers a rich and textured analysis of the establishment, procedures, and jurisprudence of the EECC. Synthesizing all relevant awards by topic and then appending all relevant awards and decisions, the book is likely to become the definitive source on the EECC. With friends like Murphy, Kidane, and Snider, the EECC might gain far more prominence than it currently enjoys." -Roger Alford, American Journal of International Law