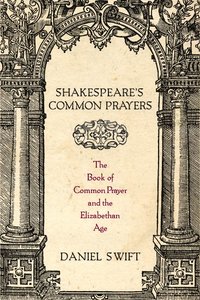 The Book of Common Prayer and the Elizabethan Age

Wynn Wheldon, The Spectator In Shakespeare's Common Prayers, Daniel Swift demonstrates the influence of the Book of Common Prayer on the Elizabethan stage, and renders a potentially arcane subject unexpectedly compelling.


Jonathan Bate, The Spectator Compellingly original, beautifully written, judiciously argued, completely in command of both literary and historical sources, this is one of the best books on Shakespeare in recent years.


Rt Revd Richard Chartres, The Church Times [A] lively book... The seriousness with which Swift explores the significance of the debates surrounding the rites of birth, marriage and death in Elizabethan England is a welcome corrective to the work of so many modern scholars who find it difficult to inhabit the God-fearers mind.


James Shapiro, author of 1599 and Contested Will Groundbreaking, historically informed, elegantly written, and invaluable for anyone interested in a deeper understanding of Shakespeare and religion in Elizabethan England.


Beatrice Groves, Journal of Ecclesiastical History This is an engaging and accessible book which studies the importance of the Book of Common Prayer as a source for Shakespeare. ... Swift's prose is deft, poised and disarmingly ready to question its own methodology. ... does an excellent service in reinvigorating the Prayer Book as a critical subject for Shakespeare studies.

<br>Daniel Swift is a literary journalist and a professor of English at Skidmore College. He is the author of Bomber County: The Poetry of a Lost Pilot's War, which was long-listed for the Guardian First Book Award and the Samuel Johnson Prize. His writings have appeared in Financial Times, The Nation, New York Times Book Review, and Times Literary Supplement.<br>

PROLOGUE: A REVEL WITH THE PURITANS; CHAPTER 1: THE ONLY BOOK IN THE WORLD; PART 1: THE FORM OF SOLEMNIZATION OF MATRIMONY; CHAPTER 2: FOR BETTER, FOR WORSE; CHAPTER 3: TILL DEATH US DEPART; PART 2: THE ORDER FOR THE ADMINISTRATION OF THE LORD'S SUPPER, OR HOLY COMMUNION; CHAPTER 4: THE QUICK AND THE DEAD; CHAPTER 5: A GAP IN OUR GREAT FEAST; PART 3: THE MINISTRATION OF BAPTISM TO BE USED IN THE CHURCH; CHAPTER 6: GRACELESS SACRAMENTS; CHAPTER 7: ABOVE ALL HUMANE POWER; EPILOGUE: FIVE OR SIX WORDS