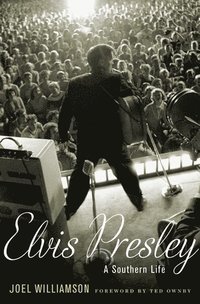 Tribune Magazine, Martin Griffin Joel Williamson's biography of Elvis Presley is an ambitious book that manages to hold the historical panorama of Southern white cult ure in the viewfinder while also probing into the more visceral details literally at one point, as we hear about the unpleasant facts revealed by the autopsy on Elvis's corpse and subconscious forces of Elvis's sexuality.


Country Music People, Spencer Leigh This is a highly readable, 350 page biography of Elvis Preseley and the text is so compelling that there were several oaccasions when I couldn't put it down.


Methodist Recorder, Tony Jasper loaded with insights and data, and written in such a way that you might for a moment think that Williamson was actually there in Germany helping Elvis to write his love letters to Anita Wood, and insisting she remained "clean and wholesome".

<br>Joel Williamson, Lineberger Professor Emeritus of the Humanities of the University of North Carolina at Chapel Hill, is the author of a number of landmark works, including William Faulkner and Southern History (OUP, 1993) and The Crucible of Race: Black-White Relations in the American South sinceEmancipation (OUP, 1984), which won the Francis Parkman Prize, the Robert F. Kennedy Book Award, and the Ralph Emerson Award. Both books were finalists for the Pulitzer Prize. <br>Ted Ownby is Professor of History and Southern Studies and Director of the Center for the Study of Southern Culture at the University of Mississippi. He is the author of American Dreams in Mississippi: Consumers, Poverty, and Culture, 1830-1998, among other books. <br>Donald L. Shaw, who assisted with the final editing, is Kenan Professor of Journalism and Mass Communication at the University of North Carolina at Chapel Hill.<br>