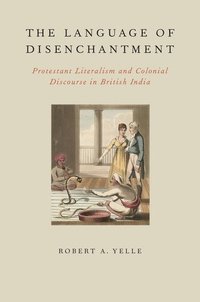 The Language of Disenchantment

Adam Harr, Reviews in Anthropology A rich contribution to scholarship on the growth and globalization of Christian language ideology. Yelle, an historian of religion, accomplishes two principal aims in his book. On a smaller (but still very large) scale, he effectively shows how various British colonial legal and religious projects in India were underpinned by Christian, specifically Protestant, language ideologies. More broadly, he presents a well-supported argument, following in the footsteps of Max
Weber, that 'what we think of as modern, secular rationality is actually an inheritance from and a transformation of Christian soteriology'


Christopher Harding, Journal of Ecclesiastical History Yelle's scholarship stretches across colonial encounters with Hindu myth, Indian languages and the practice of using mantras and is intended to take forward arguments made by Max Weber and developed by the likes of Talal Asad about the Protestant Christian roots of 'disenchantment', modernity and the religious-secular dichotomy. The result is a highly readable account Yelle offers the sort of balance and clarity with which postcolonial writing has not always been
synonymous.


Jack Harrington, Journal of Imperial and Commonwealth History The observation that protestant anti-Catholicism informed British colonial critiques of India is by no means new. Yelle's achievement lies in how he demonstrates [this] through detailed use of a range of sources from protestant theology, the Hindu reform movements and colonial debates. It is certainly the case that the intellectual history of British India has not given the same attention to the protestant roots ofsecular governmental enterprises as its metropolitan
counterpart. Yelle has produced a densely packed, highly nuanced argument. The richness and range of examples will add greatly to our understanding of the protestant dimensions of British India and give new vigour to the enduring debate about colonialism and modernity.


Roselle Gonsalves, Journal of Hindu-Christian Studies In this book, the British engagement with colonial India provides a robust case study for a more general inquiry into modernity, secularity, and 'the roots of modern exceptionalism and disenchantment.' Yelle is able to ambitiously engage with the history of colonialism in a way that is both unique and engagingthrough his analyses, he is able to add a new and valuable theological dimension to the conversation about India's engagement with British colonial powers


A. V. M. Horton, Journal of the Royal Asiatic Society This is a careful work of intellectual history based on extensive reading and profound knowledge. A vast canvas is mastered by the author, apparently with effortless ease. The coverage ranges from Christianity to Hinduism and from myth and idolatry to iconoclasm and science. Yelle's thesis is that the history of Protestantism must be studied much more deeply than has been done until now in order bett...

Bloggat om The Language of Disenchantment

<br>Robert A. Yelle is Assistant Professor in the Department of History and the Helen Hardin Honors Program at the University of Memphis. He received a Ph.D. in the History of Religions from the University of Chicago. A former Guggenheim Fellow, he is the author of Explaining the Mantras and TheSemiotics of Religion, and co-author of After Secular Law.<br>

CONTENTS; ACKNOWLEDGMENTS; ABBREVIATIONS; PREFACE; CHAPTER ONE: ORIENTALISM AND THE LANGUAGE OF DISENCHANTMENT; CHAPTER TWO: "A DISEASE OF LANGUAGE": THE ATTACK ON HINDU MYTH AS VERBAL IDOLATRY; CHAPTER THREE: "ONE STEP FROM BABEL TO PENTECOST": COLONIAL CODIFICATION, UNIVERSAL LANGUAGES, AND THE DEBATE OVER ROMAN TRANSLITERATION; CHAPTER FOUR: "VAIN REPETITIONS": THE ATTACK ON HINDU MANTRAS; CHAPTER FIVE: THE HINDU MOSES: CHRISTIAN POLEMICS AGAINST JEWISH RITUAL AND THE SECULARIZATION OF HINDU LAW; AFTERWORD; NOTES; BIBLIOGRAPHY