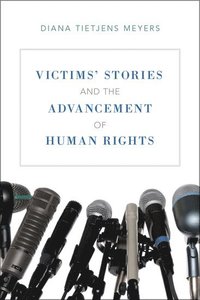 Victims' Stories and the Advancement of Human Rights

Johanna Luttrell, Hypatia Reviews Online The strength of Meyers's account is that it begins and ends in experience. It does not, first, take formal or theoretical human-rights standards and try to "fit" them into the experience of victims. Rather, she takes victims' experiences, as told in their own voices, and sees how human-rights norms both account for and fail to account for their stories. Indeed, her work lays the groundwork for hearing victims' stories in terms as close to their own as might be
possible.


Susan J. Brison, Eunice and Julian Cohen Professor for the Study of Ethics and Human Values and Professor of Philosophy, Dartmouth College In this brilliant analysis of the role of victims narratives in human rights law, Meyers draws on her vast expertise in the areas of ethics, narrative theory, social and political philosophy, moral psychology, and philosophy of law to bring fresh insights to all of these fields and to challenge predominant views of victimhood in ways that should change the way we think aboutand respond tovictims of human rights violations.


Robin May Schott, Senior Researcher, Danish Institute for International Studies Diana T. Meyers new book contributes a passionate and intellectually sharp analysis of the stories of victims. Stories about torture, imprisonment, child soldiers, and war rape proliferate. But there is a dismaying tendency to derogate and blame victims in order to sustain a belief in a just world. Meyers book, which is the fruit of years of engaged scholarship, finally puts to rest such dismaying tendencies. She argues for an empathetic engagement with victims
stories in order to understand the human meaning of human rights abuses, to better respond to such abuses and to take more adequate measures to prevent them in the future.


Margaret Urban Walker, Donald J. Schuenke Chair in Philosophy, Marquette University This concise and subtle book examines the ethical dimensions of how we think about what it is to be a victim, what expectations and biases affect how we hear their stories, and what ethical constraints should guide us in making use of their accounts in human rights research and advocacy. Meyers taps an impressive range of sourcesincluding philosophy, psychology, political and literary theoryin this perceptive and original study.

Acknowledgments Introduction Chapter 1: Two Victim Paradigms and the Problem of