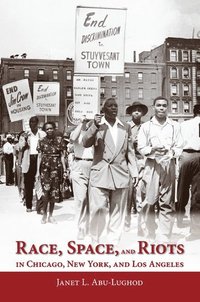 
Urban Affairs Seeks to shed light on the ever changing nature of race relations in American cities and in America at large... The individual chapters on politics, race relations and civil unrest in Chicago, New York, and Los Angeles are masterful, describing the long-term transformations of the each city's spatial, racial, and political character and locating each riot event within those transformative moments... ultimately a rewarding read.


Anthropological Quarterly In this new book, she Abu-Lughod neatly balances the historical facts of each of these cities with a deeply informed interpretation that clearly advances our knowledge of how both large and small riots unfold... rich with evidence and insight... As an urbanist, the author is without parallel when she dissects the U.S. federal effort to address the housing needs of the population.


City & Community Abu-Lughod should be commended for her scholarly contribution and for drawing attention to these pivotal events as important signs or indicators of tectonic shifts" (pp. 255, 260) taking place in the racial and political landscape of American cities...As Abu-Lughod convincingly argues, the future of urban areas, and the likelihood of future riots, will indeed depend on how American society chooses to deal with the enduring issues of racial and spatial inequality..

Bloggat om Race, Space, and Riots in Chicago, New Yo...

<br>Janet L. Abu-Lughod is professor emerita of sociology at Northwestern University and the Graduate Faculty of the New School for Social Research. She is the author of numerous books, most recently New York, Chicago, Los Angeles: America's Global Cities. In 1999 she received the Robert and Helen Lynd Award of the Section on Community and Urban Sociology, American Sociological Association, for distinguished lifetime contributions to the study of cities.<br>