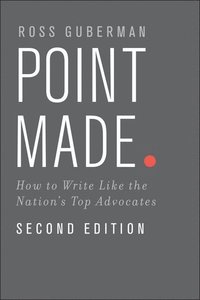 "The only way to teach students how to be effective legal writers is to immerse them in as much outstanding legal writing as possible. By concentrating so much great written advocacy so compactly--and by focusing readers' attention so precisely on the qualities that make the selected texts so compelling--this book supplies an indispensable tool to those engaged in the craft of making excellent lawyers." --Dan Kahan, Elizabeth K. Dollard Professor of Law, Yale Law School "Effective advocacy consists of a skillful blend of clear language and a sense of dramatic structure. Guberman's exemplars demonstrate again and again how to transform an otherwise ordinary case into a morality tale with a happy ending." --Judge Thomas Penfield Jackson"A must for the library of veteran litigators and aspiring moot court competitors. Ross Guberman teaches the art of persuasive legal writing with lively quotes from top-notch briefs, coupled with his own insights and recommendations." --Stephen Shapiro, Senior Member, Supreme Court and Appellate Litigation group, Mayer Brown"I love this book and recommend it for everyone. Ross Guberman's bag of tricks will spiff up your writing. He shares 50 techniques, and then-the fun part-he offers choice nuggets to show you how the hot shots pull it off." --Ronald Marmer, Chair-Elect, ABA Section on Litigation; Partner, Jenner & Block"Point Made is writing-nerd nirvana...It instantly won a place on my short list of favorite legal-writing books." --Jay O'Keeffe, DeNovo A Virginia Appellate Law Blog "Entertaining and informative...a smart approach to writing persuasive legal briefs. Rather than lecturing the reader about what to do, Point Made shows you how the headline lawyers do it." --Steven R. Merican, Illinois Appellate Lawyer Blog "[Guberman] doesn't just tell you what to do: he shows you...I learned a lot from reading Ross's book; I think you will too." --Raymond W

Ross Guberman is president of Legal Writing Pro, an advanced legal-writing training and consulting firm. He has worked with thousands of attorneys at more than 100 of the world's largest and most prestigious law firms and for dozens of state and federal agencies and bar associations. Guberman is also a Professorial Lecturer in Law at The George Washington University Law School, and he holds degrees from Yale, the Sorbonne, and The University of Chicago Law School. Before founding Legal Writing Pro, Guberman worked as a musician, lawyer, translator, editor, and journalist. He has also commented on law, business, and lawyer development for major newspapers, radio stations, trade publications, and television networks, and he has addressed several major international conferences as well.

ACKNOWLEDGMENTS XXI ; INTRODUCTION XXIII ; PART ONE ; THE THEME 1 ; 1. BRASS TACKS: "EXPLAIN WHO, WHAT, WHEN, WHERE, WHY, HOW" ; 2. THE SHORT LIST: NUMBER YOUR PATH TO VICTORY ; 3. WHY SHOULD I CARE? : GIVE THE COURT A REASON TO WANT TO FIND FOR YOU ; 4. DON'T BE FOOLED : DRAW A LINE IN THE SAND ; PART TWO ; THE TALE ; 5. PANORAMIC SHOT : SET THE STAGE AND SOUND YOUR THEME ; 6. SHOW, NOT TELL : LET CHOICE DETAILS SPEAK FOR THEMSELVES ; 7. ONCE UPON A TIME : REPLACE DATES WITH PHRASES THAT CONVEY A SENSE OF TIME ; 8. HEADLINERS : USE HEADINGS TO BREAK UP YOUR FACT SECTION AND TO ADD PERSUASIVE EFFECT ; 9. BACK TO LIFE : CENTER TECHNICAL MATTER ON PEOPLE OR ENTITIES ; INTERLUDE: GAUGING YOUR BRIEF'S READABILITY ; 10. POKER FACE : CONCEDE BAD FACTS, BUT PUT THEM IN CONTEXT ; 11. END WITH A BANG : LEAVE THE COURT WITH A FINAL IMAGE OR THOUGHT ; PART THREE ; THE MEAT ; USING HEADINGS ; 12. RUSSIAN DOLL: NEST YOUR HEADINGS AND SUBHEADINGS ; 13. HEADS I WIN, TAILS YOU LOSE : ARGUE IN THE ALTERNATIVE ; INTERLUDE: LOVE "BECAUSE" ; STRUCTURING THE SECTIONS ; 14. SNEAK PREVIEW : INCLUDE AN UMBRELLA PARAGRAPH BEFORE YOUR HEADINGS AND SUBHEADINGS ; 15. WISH I WERE THERE : START EACH PARAGRAPH BY ANSWERING A QUESTION YOU EXPECT THE COURT TO HAVE ; 16. SOUND OFF : START THE PARAGRAPHS WITH NUMBERED REASONS ; ANALOGIZING ; 17. LONG IN THE TOOTH : SAY "ME TOO" ; 18. PEAS IN A POD : LINK YOUR PARTY WITH THE PARTY IN THE CITED CASE ; 19. MINCE THEIR WORDS : MERGE PITHY QUOTED PHRASES INTO A SENTENCE ABOUT YOUR OWN CASE ; 20. ONE UP : CLAIM THAT THE CASE YOU'RE CITING APPLIES EVEN MORE TO YOUR OWN DISPUTE ; 21. INTERCEPTION : CLAIM THAT A CASE YOUR OPPONENT CITES HELPS YOU ALONE ; 22. REBOUND : "RE-ANALOGIZE" AFTER THE OTHER SIDE TRIES TO DISTINGUISH ; DISTINGUISHING ; 23. NOT HERE, NOT NOW : LEAD WITH THE KEY DIFFERENCE BETWEEN YOUR OPPONENT'S CASE AND YOUR OWN ; 24. ONE FELL SWOOP : DISTINGUISH A LINE OF CASES ALL AT ONCE ; 25. NOT SO FAST : SHOW THAT THE CASE DOESN'T APPLY AS BROADLY AS YOUR OPPONENT SUGGESTS ; 26. AUTHORITY PROBLEMS : SUGGEST THAT THE CASE DESERVES LITTLE RESPECT ; USING PARENTHETICALS ; 27. PING ME : INTRODUCE YOUR PARENTHETICALS WITH PARALLEL PARTICIPLES ; 28. SPEAK FOR YOURSELF : INCLUDE A SINGLE-SENTENCE QUOTATION ; 29. HYBRID MODEL : COMBINE PARTICIPLES AND QUOTATIONS ; INTRODUCING BLOCK QUOTATIONS ; 30. LEAD 'EM ON : INTRODUCE BLOCK QUOTATIONS BY EXPLAINING HOW THE LANGUAGE SUPPORTS YOUR ARGUMENT ; USING FOOTNOTES ; INTERLUDE: CITATIONS IN FOOTNOTES ; 31. RACE TO THE BOTTOM : USE FOOTNOTES ONLY IN MODERATION TO ADDRESS RELATED SIDE POINTS AND TO ADD SUPPORT ; PART FOUR ; THE WORDS ; LIVEN UP THE LANGUAGE ; 32. ZINGERS : COLORFUL VERBS ; 33. WHAT A BREEZE : CONFIDENT TONE ; 34. MANNER OF SPEAKING : FIGURES OF SPEECH ; 35. THAT REMINDS ME : EXAMPLES AND ANALOGIES ; JUMPSTART YOUR SENTENCES ; 36. THE STARTING GATE : THE ONE-SYLLABLE OPENER ; 37. SIZE MATTERS : THE PITHY SENTENCE ; 38. FREIGHT TRAIN : THE BALANCED, ELEGANT LONG SENTENCE ; 39. LEADING PARTS : TWO SENTENCES JOINED AS ONE ; 40. TALK TO YOURSELF : THE RHETORICAL QUESTION ; 41. PARALLEL LIVES : THE PARALLEL CONSTRUCTION ; CREATIVE PUNCTUATION ; 42. A DASH OF STYLE : THE DASH ; INTERLUDE: THE HYPHEN ; 43. GOOD BEDFELLOWS : THE SEMICOLON ; 44. MAGICIAN'S MARK : THE COLON ; SEAMLESS FLOW ; 45. TAKE ME BY THE HAND : LOGICAL CONNECTORS ; 110 TRANSITION WORDS AND PHRASES ; 46. BRIDGE THE GAP : LINKED PARAGRAPHS ; VISUAL APPEAL ; INTERLUDE: LOOKING GOOD ; 47. JOIN MY TABLE : TABLES AND CHARTS ; 48. BULLET PROOF : BULLET POINTS AND LISTS ; PART FIVE ; THE CLOSE ; THE LAST WORD ; 49. PARTING THOUGHT : END THE ARGUMENT WITH A PROVOCATIVE QUOTATION OR PITHY THOUGHT ; 50. WRAP-UP : RECAST YOUR MAIN POINTS IN A SEPARATE CONCLUSION ; APPENDICES ; THE TOP FIFTY ADVOCATES: BIOGRAPHIES ; HOW TO WRITE THE PERFECT BRIEF: FIFTY TECHNIQUES ; STEP ONE: THE THEME ; STEP TWO: THE TALE ; STEP THREE: THE MEAT ; STEP FOUR: THE WORDS ; STEP FIVE: