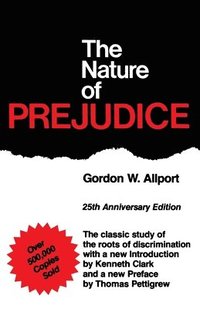 The Nature Of Prejudice

av Gordon W Allport
Häftad Engelska, 1979-01-01
249
Köp
Spara som favorit
Skickas inom 5-8 vardagar.
Fri frakt inom Sverige för privatpersoner.
With profound insight into the complexities of the human experience, Harvard psychologist Gordon Allport organized a mass of research to produce a landmark study on the roots and nature of prejudice. First published in 1954, The Nature of Prejudice remains the standard work on discrimination. Now this classic study is offered in a special unabridged edition with a new introduction by Kenneth Clark of Columbia University and a new preface by Thomas Pettigrew of Harvard University.Allport's comprehensive and penetrating work examines all aspects of this age-old problem: its roots in individual and social psychology, its varieties of expression, its impact on the individuals and communities. He explores all kinds of prejudice-racial, religious, ethnic, economic and sexual-and offers suggestions for reducing the devastating effects of discrimination.The additional material by Clark and Pettigrew updates the social-psychological research in prejudice and attests to the enduring values of Allport's original theories and insights.
Visa hela texten

"A profound book ... As a source of study, it is a library in itself."--Christian Herald "Probably the most comprehensive study of all aspects of this problem which has yet appeared."--Journal of Personality "The Nature of Prejudice is a remarkable mixture of careful scholarship and humane values ... The book has influenced an entire generation of social psychologists, and deservedly so..."--Elliot Aronson, Human Nature Magazine "One of the most influential and often-cited publications in the entire field of intergroup relations."--Irwin Katz, Political Psychology

Bloggat om The Nature Of Prejudice

Gordon W. Allport was born in 1897 in Montezuma, Indiana. He received his A.B., A.M., and Ph.D. in psychology from Harvard University, did postgraduate work abroad, and returned to Harvard in 1930, where he served as professor of psychology until his death in 1967. During his lifetime, Allport served as president of both the American and Eastern Psychological Associations, director of the National Opinion Research Center, and editor of the Journal of Abnormal and Social Psychology. His other books included The Psychology of Rumor, The Individual and His Religion, Personality, and Becoming.

Preferential Thinking * What Is the Problem? * The Normality of Prejudgment * Formation of In-Groups * Rejection of Out-Groups * Patterning and Extent of Prejudice Group Differences * The Scientific Study of Group Differences * Racial and Ethnic Differences * Visibility and Strangeness * Traits Due to Victimization Perceiving And Thinking About Group Differences * The Cognitive Process * Linguistic Factors * Stereotypes in Our Culture * Theories of Prejudice Sociocultural Factors * Social Structure And Cultural Pattern * Choice of Scapegoats * The Effect of Contact * Acquiring Prejudice * Conforming * The Young Child * Later Learning * Inner Conflict The Dynamics Of Prejudice * Frustration * Aggression and Hatred * Anxiety, Sex, and Guilt * Projection Character Structure * The Prejudiced Personality * Demagogy * The Tolerant Personality * Religion and Prejudice Reducing Group Tensions * Ought There to Be a Law? * Evaluation of Programs * Limitations and Horizons