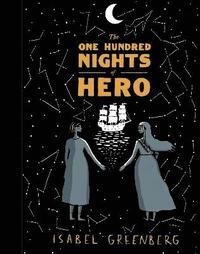 The One Hundred Nights of Hero

av Isabel Greenberg
Inbunden Engelska, 2016-09-01
183
Köp
Spara som favorit
Skickas inom 5-8 vardagar.
Gratis frakt inom Sverige över 159 kr för privatpersoner.
Finns även som
Visa alla 1 format & utgåvor
'A feminist fairy-tale, which I recommend if you're looking for a Christmas present for a teenage girl... A wondrously intricate book, and a witty attack on the patriarchy, this is an instant classic.' Rachel Cooke, an Observer Book of the Year From the author who brought you The Encyclopedia of Early Earth comes another Epic Tale of Derring-Do. Prepare to be dazzled once more by the overwhelming power of stories and see Love prevail in the face of Terrible Adversity! You will read of betrayal, loyalty, madness, bad husbands, lovers both faithful and unfaithful, wise old crones, moons who come out of the sky, musical instruments that won't stay quiet, friends and brothers and fathers and mothers and above all, many, many sisters.
Visa hela texten

Think The Arabian Nights depicted through ink and block shades in this gorgeously stylised graphic novel. Despite being fiction, its power lies in its honest and witty narration which so perfectly reflects the lives of women in our own world. * Stylist * Greenburg has an extraordinary lightness of touch, piling humour and a wonderfully conversational tone into the narrative, which shines brightly and juxtaposes the darkness. Her illustration is similarly bustling with humour and character. * MYM Magazine * A feminist fairy-tale, which I recommend if you're looking for a Christmas present for a teenage girl... A wondrously intricate book, and a witty attack on the patriarchy, this is an instant classic. -- Rachel Cooke * Observer, Book of the Year *

Isabel Greenberg is a London-based illustrator and writer. She studied illustration at the University of Brighton. She won the Cape/Comica/Observer graphic short story prize in 2011 with 'Love in a Very Cold Climate'. Her debut graphic novel, The Enyclopedia of Early Earth, won two Eisner Awards and was a New York Times bestseller.