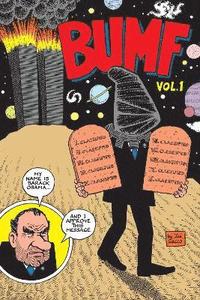 av Joe Sacco
Häftad Engelska, 2014-11-06
126
Köp
Spara som favorit
Skickas inom 5-8 vardagar.
Fri frakt inom Sverige över 159 kr för privatpersoner.
Joe Sacco is renowned for his non-fiction books of comics journalism like Palestine, Safe Area Gorazde and Footnotes in Gaza. Now in Bumf he returns to his early days as a satirist and underground cartoonist. In the vein of the old underground comix like ZAP or Weirdo, Bumf will be puerile, disgusting, and beyond redemption. It will go where it wants to go, and do what it wants to do. It will also be very funny.
Visa hela texten

It's a book with an expert command of an abhorrent style - and in this is its substance. -- Yo Zushi * New Statesman * Vastly entertaining. -- Rachel Cooke * Observer *

Joe Sacco, one of the world's greatest cartoonists, is widely hailed as the creator of war reportage comics. He is the author of, among other books, Palestine, which received the American Book Award, and Safe Area: Gorazde, which won the Eisner Award and was named a New York Times notable book and Time magazine's best comic book of 2000. His books have been translated into fourteen languages and his comics reporting has appeared in Details, The New York Times Magazine, Time, Harper's and the Guardian. He lives in Portland, Oregon.