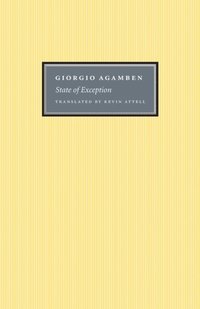 av Agamben Giorgio Agamben
E-bok (PDF - DRM), Engelska, 2008-07-18
289
Ladda ned
Spara som favorit
Laddas ned direkt
Läs i vår app för iPhone, iPad och Android
Finns även som
Visa alla 2 format & utgåvor
Two months after the attacks of 9/11, the Bush administration, in the midst of what it perceived to be a state of emergency, authorized the indefinite detention of noncitizens suspected of terrorist activities and their subsequent trials by a military commission. Here, distinguished Italian philosopher Giorgio Agamben uses such circumstances to argue that this unusual extension of power, or &quotestate of exception,&quote has historically been an underexamined and powerful strategy that has the potential to transform democracies into totalitarian states.The sequel to Agamben's Homo Sacer: Sovereign Power and Bare Life, State of Exception is the first book to theorize the state of exception in historical and philosophical context. In Agamben's view, the majority of legal scholars and policymakers in Europe as well as the United States have wrongly rejected the necessity of such a theory, claiming instead that the state of exception is a pragmatic question. Agamben argues here that the state of exception, which was meant to be a provisional measure, became in the course of the twentieth century a normal paradigm of government. Writing nothing less than the history of the state of exception in its various national contexts throughout Western Europe and the United States, Agamben uses the work of Carl Schmitt as a foil for his reflections as well as that of Derrida, Benjamin, and Arendt.In this highly topical book, Agamben ultimately arrives at original ideas about the future of democracy and casts a new light on the hidden relationship that ties law to violence.
Visa hela texten