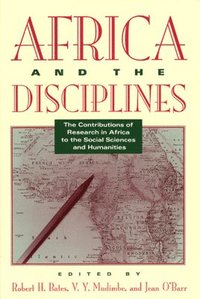 Africa and the Disciplines

av Robert H Bates, V Y Mudimbe, Jean F O'Barr
Häftad Engelska, 1993-09-01
239
Köp
Spara som favorit
Skickas inom 7-10 vardagar.
Fri frakt inom Sverige för privatpersoner.
African Studies, contrary to some accounts, is not a separate continent in the world of American higher education. Its intellectual borders touch those of economics, literature, history, philosophy and art; its history is the story of the world, both ancient and modern. This is the clear conclusion of "Africa and the Disciplines", a book that addresses the question: Why should Africa be studied in the American university? This question was put to distinguished scholars in the social sciences and humanities, prominent Africanists who are also leaders in their various disciplines. Their responses make a strong case for the importance of research on Africa to the academy. Paul Collier's essay, for example, shows how studies of African economies have clarified our understanding of the small open economies, and contributed to the theory of repressed inflation and to a number of areas in microeconomics as well. Art historian Suzanne Blier uses the terms and concepts that her discipline has applied to Africa to analyze the habits of mind and social practice of her own field. Christopher I. Miller describes the confounding and enriching impact of Africa on European and American literary theory. Political scientist Richard Sklar outlines Africa's contributions to the study of political modernization, pluralism, and rational choice. These essays, together with others from scholars in history, anthropology, philosophy, and comparative literature, attest to the influence of African research throughout the curriculum. Contributors are Paul Collier, Sally Falk Moore, Richard L. Sklar, Steven Feierman, Susan Blier, Christopher L. Miller, and Kwame Anthony Appiah, in addition to the editors.
Visa hela texten

Bloggat om Africa and the Disciplines