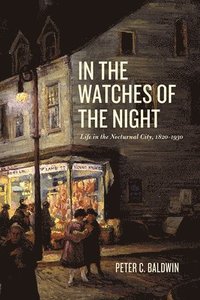 In the Watches of the Night

av Peter C Baldwin
Häftad Engelska, 2015-05-28
262
Köp
Spara som favorit
Finns även som
Visa alla 2 format & utgåvor
Before skyscrapers and streetlights glowed at all hours, American cities fell into inky blackness with each setting of the sun. But over the course of the nineteenth and early twentieth centuries, new technologies began to light up streets, sidewalks, buildings, and public spaces. Peter C. Baldwin's evocative book depicts the changing experience of the urban night over this period, visiting a host of actors - scavengers, newsboys, and mashers alike - in the nocturnal city. Baldwin examines work, crime, transportation, and leisure as he moves through the gaslight era, exploring the spread of modern police forces and the emergence of late-night entertainment, to the era of electricity, when social campaigns sought to remove women and children from public areas at night. While many people celebrated the transition from darkness to light as the arrival of twenty-four hours of daytime, Baldwin shows that certain social patterns remained, including the danger of street crime and the skewed gender profile of night work. Sweeping us from concert halls and brothels to streetcars and industrial forges, In the Watches of the Night is an illuminating study of a vital era in American urban history.
Visa hela texten

"Highly recommended."--Roger Ekirch, Virginia Polytechnic University "Choice" "In an engrossing and richly researched book, Peter C. Baldwin explores how US cities responded to the sun's inevitable daily setting--economically, socially, and culturally--during a century of industrialization. Synthesizing monographs on nightlife, city lighting, urban vice, and trade and commerce after dark (among other topics) and incorporating his own wide-ranging research, Baldwin has produced a pioneering analysis of how urban America's relationship with the night evolved from colonial times to the industrial age."--Roger Ekirch, Virginia Polytechnic University "American Historical Review" "This is a brilliantly conceived and superbly written examination of the physical, economic, social, and cultural changes in nighttime urban life in the cities of the Northeast during the nineteenth and early twentieth centuries."--Roger Ekirch, Virginia Polytechnic University "Journal of American History" "This study engages in a captivating cultural dialogue on how nineteenth-century urban Americans shaped the culture of night amidst technological changes ranging from gas lamps to incandescent lighting."--Megan Kendrick, California State University, Los Angeles "The Historian" "Like an attentive nineteenth-century night watchman, Baldwin is ever alert to new behaviors fostered by the advent of night illumination in American cities. He explores changes in work routines, city amusements, and crime, and does not neglect the night scavengers collecting privy wastes and the farmers bringing their perishables to markets, activities improved by the preservative effects of cool night air. I found In the Watches of the Night an engrossing book." --Patricia Cline Cohen, University of California, Santa Barbara "Few works of history can claim to alter the landscape of the past, but In the Watches of the Night deeply enriches our understanding of the American experience during the nineteenth and early twentieth centuries. Extensively researched and crisply written, this splendid volume rescues a vibrant realm of urban life from the shadows of historical neglect." --Roger Ekirch, Virginia Polytechnic University "In the Watches of the Night is a terrific book, engaging and truly informative, on a topic so interesting that one wonders why it had not been adequately explored already. Particularly impressive is the careful delineation of life beforehand, so change can really be assessed, and the range of groups and activities embraced in the analysis." --Peter N. Stearns, George Mason University "Baldwin's book is an example of just how rich and revealing an exploration of night in terms of work, practice, and power can be. Extensively researched, In the Watches of the Night weaves diaries, newspapers, government documents, travel guides, and more into a complex new picture of life and labor during the nineteenth- and early twentieth-century American urban night."--Roger Ekirch, Virginia Polytechnic University "Journal of Interdisciplinary History" "In the Watches of the Night brings a much-needed fourth dimension to the spatial turn of urban studies. Its originality and insight establish Peter Baldwin as a leading authority on the everyday life of the urban flaneur in nineteenth-century America. This well-written, lively book builds upon his award-winning monograph. . . . Baldwin deserves credit for opening up the frontier of the urban night for future exploration."--Roger Ekirch, Virginia Polytechnic University "Reviews in American History"

Peter C. Baldwin is professor of history at the University of Connecticut. He is the author of Domesticating the Street: The Reform of Public Space in Hartford, 1850-1930.