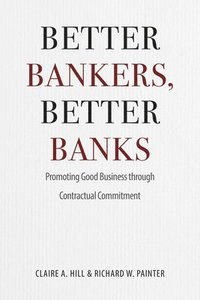 av Claire A Hill, Richard W Painter
Inbunden Engelska, 2015-10-19
224
Köp
Spara som favorit
Finns även som
Visa alla 1 format & utgåvor
Taking financial risks is an essential part of what banks do, but there's no clear sense of what constitutes responsible risk. Taking legal risks seems to have become part of what banks do as well. Since the financial crisis, Congress has passed copious amounts of legislation aimed at curbing banks' risky behavior. Lawsuits against large banks have cost them billions. Yet bad behavior continues to plague the industry. Why isn't there more change? In Better Bankers, Better Banks, Claire A. Hill and Richard W. Painter look back at the history of banking and show how the current culture of bad behavior-dramatized by the corrupt, cocaine-snorting bankers of The Wolf of Wall Street-came to be. In the early 1980s, banks went from partnerships whose partners had personal liability to corporations whose managers had no such liability and could take risks with other people's money. A major reason bankers remain resistant to change, Hill and Painter argue, is that while banks have been faced with large fines, penalties, and legal fees-which have exceeded one hundred billion dollars since the onset of the crisis-the banks (which really means the banks'shareholders) have paid them, not the bankers themselves. The problem also extends well beyond the pursuit of profit to the issue of how success is defined within the banking industry, where highly paid bankers clamor for status and clients may regard as inevitable bankers who prioritize their own self-interest. While many solutions have been proposed, Hill and Painter show that a successful transformation of banker behavior must begin with the bankers themselves. Bankers must be personally liable from their own assets for some portion of the bank's losses from excessive risk-taking and illegal behavior. This would instill a culture that discourages such behavior and in turn influence the sorts of behavior society celebrates or condemns. Despite many sensible proposals seeking to reign in excessive risk-taking, the continuing trajectory of scandals suggests that we're far from ready to avert the next crisis. Better Bankers, Better Banks is a refreshing call for bankers to return to the idea that theirs is a noble profession.
Visa hela texten

"Hill and Painter do not regard ethical failings in the financial industry as the actions of a few bad apples but, rather, as inevitable consequences of an unhealthy culture. . . . The government should focus on changing bankers' incentives. Specifically, the authors seek to restore the environment that existed before the major investment banks transformed themselves from partnerships into publicly traded corporations. . . . This book contributes in an original and valuable manner toward combating ethical abuses in the financial markets."--Saule T. Omarova, Cornell Law School "Financial Analysts Journal" (5/12/2016 12:00:00 AM) "Hill and Painter have a proposal for fixing America's banking system: encourage banks to adopt 'covenant banking, ' a term they coined for a set of practices that would put the personal wealth and compensation of bankers at stake if something goes wrong."--Sarah Smith "National Journal" (5/12/2016 12:00:00 AM) "Hill and Painter have the historical sensibility, financial and legal competence, and literary skill to elaborate the most important, unanswered question facing contemporary banking: How best to curb the individual and institutional corruption that has emerged over the past decade? Their answer, carefully laid out with all its merits and potential criticisms, is rooted in the sensible notion that 'responsible' banking can be best served when senior bankers are held personally liable for a portion of their banks' debts, fines, and settlements. This is not as easy a remedy as it might seem, and the authors take the reader through all the fascinating details of this seemingly intuitive proposal. This is a provocative book. It will interest the general public, Congress, and concerned regulators, as well as many bank executives who are currently at work redefining what responsible banking means for their organizations and trying to induce constructive changes in corporate culture."--Malcolm S. Salter, author of Innovation Corrupted: The Origins and Legacy of Enron's Collapse "Hill and Painter have thrown down the gauntlet, challenging the leaders who run modern banks to embrace a new approach they call 'covenant banking.' They argue, with abundant passion and compelling evidence, that current modes of banking regulation and litigation have failed, and that the financial markets require that bankers undertake substantial and new forms of cultural responsibility. Their book aspires to place those who work on Wall Street in a new role in society, that of the true professional instead of the scoundrel. Both authors are well-equipped experts and their arguments are among the most provocative to emerge from the aftermath of the global financial crisis."--Frank Partnoy, author of Wait: The Art and Science of Delay "Why have bankers so often behaved so badly? Two eminent legal scholars lead us on a grand tour of recent financial catastrophes to demonstrate how a shift in legal structure--from partnership to corporate form--transformed staid banking institutions into unscrupulous gambling houses. The cultural shift occurred once bankers realized how to impose downside risk on shareholders while still retaining upside gains through lavish compensation packages. Fortunately, the authors' diagnosis comes with a cure--personal liability. Instead of allowing bankers to hide behind entity shields, the authors' prescribe 'covenant banking, ' a form of contractually imposed personal liability, as a means of aligning banker behavior with socially optimal risk-taking. This is a compelling policy proposal, cogently presented."--Sean Griffith, coauthor of Ensuring Corporate Misconduct: How Liability Insurance Undermines Shareholder Litigation "A thoughtful, modern exploration of a pernicious problem: excessive risk-taking in banking. Better Bankers, Better Banks offers an original and path-breaking perspective to the problem, including a brave rem