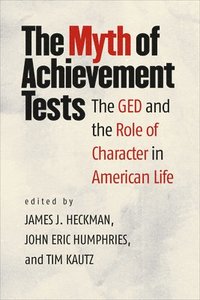 The Myth of Achievement Tests

The GED and the Role of Character in American Life

av James J Heckman
Häftad Engelska, 2015-09-18
293
Köp
Spara som favorit
Kan tyvärr inte levereras innan julafton.
Finns även som
Visa alla 2 format & utgåvor
Achievement tests play an important role in modern societies. They are used to evaluate schools, to assign students to tracks within schools, and to identify weaknesses in student knowledge. The GED is an achievement test used to grant the status of high school graduate to anyone who passes it. GED recipients currently account for 12 percent of all high school credentials issued each year in the United States. But do achievement tests predict success in life? The Myth of Achievement Tests shows that achievement tests like the GED fail to measure important life skills. James J. Heckman, John Eric Humphries, Tim Kautz, and a group of scholars offer an in-depth exploration of how the GED came to be used throughout the United States and why our reliance on it is dangerous. Drawing on decades of research, the authors show that, while GED recipients score as well on achievement tests as high school graduates who do not enroll in college, high school graduates vastly outperform GED recipients in terms of their earnings, employment opportunities, educational attainment, and health. The authors show that the differences in success between GED recipients and high school graduates are driven by character skills. Achievement tests like the GED do not adequately capture character skills like conscientiousness, perseverance, sociability, and curiosity. These skills are important in predicting a variety of life outcomes. They can be measured, and they can be taught. Using the GED as a case study, the authors explore what achievement tests miss and show the dangers of an educational system based on them. They call for a return to an emphasis on character in our schools, our systems of accountability, and our national dialogue. Contributors Eric Grodsky, University of Wisconsin-Madison Andrew Halpern-Manners, Indiana University Bloomington Paul A. LaFontaine, Federal Communications Commission Janice H. Laurence, Temple University Lois M. Quinn, University of Wisconsin-Milwaukee Pedro L. Rodriguez, Institute of Advanced Studies in Administration John Robert Warren, University of Minnesota, Twin Cities.
Visa hela texten

"Essential. . . . An insightful, balanced, comprehensive, and critical examination of a test that many proponents of standardized tests overlook. . . . The work questions how the GED is granted equivalent status to a high school diploma and examines how faith in standardized tests is sometimes misplaced."--Richard Boyle, president and CEO, ECMC Foundation "Choice" (10/21/2014 12:00:00 AM) Remarkable. A display of technical virtuosity in the service of an ambitious agenda: restoring character to the heart of US education policy. Analyzing the 'natural experiment' of the GED program, Heckman and his team show that it is lack of character, rather than lack of academic skill, that hobbles life chances today. Everybody interested in education, social mobility, and inequality has to read this book: anyone interested in the future of America ought to.--Richard V. Reeves, Brookings Institution "A masterful synthesis of the research literature on the cognitive and character skills central to successfully navigating both school and life."--Angela Lee Duckworth, University of Pennsylvania "With The Myth of Achievement Tests, James J. Heckman, John Eric Humphries, and Tim Kautz have offered a wealth of insightful analysis and brought together a number of topics often treated separately to inform a comprehensive discussion of the growth, character, and impact of the GED that is truly monumental. This is a first-rate book."--Eric A. Hanushek, Stanford University "Every American interested in our most valuable asset--our children--should read The Myth of Achievement Tests. Education reform, as a national enterprise, has lacked a coherent, organized agenda. Heckman and colleagues suggest that the central feature of any nationwide education reform agenda is an understanding of the importance of character to lifelong success. The research in this book can edify education reform, providing the base for a national enterprise that is coherent and organized."--Richard Boyle, president and CEO, ECMC Foundation For decades, the creators of the GED program have promoted it as a second chance for high school dropouts. . . . As promising as that sounds, the GED program is actually failing many of the students it purports to help, argues The Myth of Achievement Tests. . . . While the authors are quick to note that some have benefited from the test, they contend the GED alone isn't enough. Although those taking the test score roughly the same as high school graduates who didn't go on to college, many lack what are referred to as 'character skills, ' such as persistence, motivation and reliability.--Richard Boyle, president and CEO, ECMC Foundation "Chicago Tribune" "More than a meticulous work of social science, [The Myth of Achievement Tests] is also is an objective, but hard-hitting, analysis of the testing that has driven school reform, and a warning about the unintended harm done by ill-conceived policies. . . . A book this important should be read by everyone, not just those who will give it the multiple close readings that its prose requires."--Richard Boyle, president and CEO, ECMC Foundation "John Thompson, At the Chalk Face" (8/6/2014 12:00:00 AM)