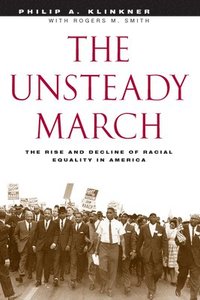 The Rise and Decline of Racial Equality in America

av Philip A Klinkner, Rogers M Smith
Inbunden Engelska, 1999-11-01
419
Köp
Spara som favorit
Specialorder (osäker tillgång). Skickas inom 11-20 vardagar.
Fri frakt inom Sverige för privatpersoner.
Finns även som
Visa alla 1 format & utgåvor
This work aims to disprove the idea that the United States has been on a "steady march" toward the end of racial discrimination. Rather, progress has been made only in brief periods, under special conditions, and it has always been followed by periods of stagnation and retrenchment. In this history of race relations, Philip Klinkner and Rogers Smith show that significant advances in racial justice have occurred only when three circumstances have converged: large-scale wars, which require extensive economic and military mobilization of African Americans; an enemy that inspires American leaders to advocate inclusive, egalitarian values in order to justify the war; and domestic political organizations that are able to pressure those leaders to follow through on their rhetoric. Klinkner and Smith's history demonstrates that substantial progress has not yet occurred without these factors working together, as they did during the Revolutionary War, Civil War and Cold War eras. With its insights into contemporary racial politics and its wealth of historical material, this book is a controversial analysis of race relations across two centuries. The fight for racial equality has not been won, the authors argue, nor will it be unless one recognizes the true factors behind progress and the extraordinary efforts required to achieve it.
Visa hela texten