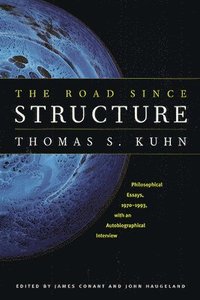 The Road since Structure

Philosophical Essays, 1970-1993, with an Autobiographical Interview

av Thomas S Kuhn, James Conant, John Haugeland
Häftad Engelska, 2002-12-01
239
Köp
Spara som favorit
Skickas inom 10-15 vardagar.
Fri frakt inom Sverige för privatpersoner.
Beställ senast imorgon kl 17:30 för leverans innan jul!
Thomas Kuhn will undoubtedly be remembered primarily for The Structure of Scientific Revolutions, a book that introduced one of the most influential conceptions of scientific progress to emerge during the twentieth century. The Road since Structure, assembled with Kuhn's input before his death in 1996, follows the development of his thought through the later years of his life: collected here are several essays extending and rethinking the perspectives of Structure as well as an extensive and remarkable autobiographical interview in which Kuhn discusses the course of his life and philosophy.
Visa hela texten

"The essays fall into three groups, each arranged chronologically. The first shows the development of Kuhn's thought from 1980 through 1990, the second consists of his responses to criticisms of other philosophers, the last is a candid, highly interesting and informative interview Kuhn did a year before his death....His work is central to the question of the relation of science and culture." - Library Journal "It's sometimes claimed that Kuhn toned down his radical views after Structure, but this is a mistake. He did occasionally repudiate earlier ideas, but the bulk of his later work is a significant articulation and defense of his fundamental views, not a retraction.... The Road since Structure ends with a fascinating 68-page interview with Kuhn, recorded a year before his death. This gives a strong sense of his personality and of the development of his ideas and career. It brings out the extent to which the history of science was for him from the start a vehicle for philosophical inquiry." - Peter Lipton, London Review of Books "I wanted it to be an important book; clearly it was being an important book - I didn't like most of the ways in which it was being an important book." - Kuhn on The Structure of Scientific Revolutions from The Road since Structure "Kuhn's masterpiece did not unify science at all. It broke it open, exposing the inner workings of human creativity and starting, along the way, a thousand arguments that not even Kuhn's death will resolve." - Malcolm Gladwell, The New Yorker