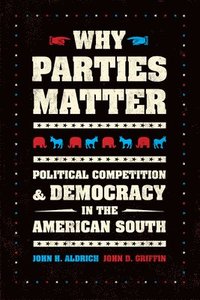 Political Competition and Democracy in the American South

av John H Aldrich, John D Griffin
Häftad Engelska, 2018-01-10
334
Köp
Spara som favorit
Finns även som
Visa alla 2 format & utgåvor
Since the founding of the American Republic, the North and South have followed remarkably different paths of political development. Among the factors that have led to their divergence throughout much of history are differences in the levels of competition among the political parties. While the North has generally enjoyed a well-defined two-party system, the South has tended to have only weakly developed political parties and at times no system of parties to speak of. With Why Parties Matter, John H. Aldrich and John D. Griffin make a compelling case that competition between political parties is an essential component of a democracy that is responsive to its citizens and thus able to address their concerns. Tracing the history of the parties through four eras the Democratic-Whig party era that preceded the Civil War; the post-Reconstruction period; the Jim Crow era, when competition between the parties virtually disappeared; and the modern era Aldrich and Griffin show how and when competition emerged between the parties and the conditions under which it succeeded and failed. In the modern era, as party competition in the South has come to be widely regarded as matching that of the North, the authors conclude by exploring the question of whether the South is poised to become a one-party system once again with the Republican party now dominant.
Visa hela texten

"Why Parties Matter takes on an ambitious task: charting the development of political party competition in the United States with a special focus on how the South lagged behind the rest of the country for most of American history. The breadth of time covered by this analysis is unprecedented, and the two major topics covered here--party development and the politics of the South--are both deeply important to the theoretical, empirical, and normative literature in American politics."--Jason M. Roberts, University of North Carolina, Chapel Hill "Why Parties Matter argues that democracy fosters party competition, resulting in the greater well-being of citizens who are able to hold their representatives accountable at the ballot box. The American South, with its remarkable political transformation, is an excellent case to prove this extremely important thesis. Now, as Aldrich and Griffin demonstrate, with the presence of a genuine two-party system, we see that even in Dixie, democracy has led to political outputs that better the interests of its citizenry because of politicians who face the real possibility of losing their next election."--Seth McKee, Texas Tech University

John H. Aldrich is the Pfizer-Pratt University Professor of Political Science at Duke University. He is the author or coauthor of numerous books and a fellow of the American Academy of Arts and Sciences. John D. Griffin is associate professor of political science at the University of Colorado, Boulder, and coauthor of Minority Report.