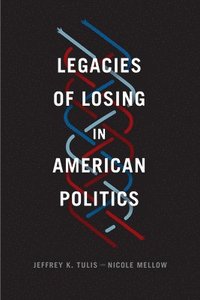 Legacies of Losing in American Politics

av Jeffrey K Tulis, Nicole Mellow
Häftad Engelska, 2018-02-16
269
Köp
Spara som favorit
Skickas inom 7-10 vardagar.
Fri frakt inom Sverige för privatpersoner.
Finns även som
Visa alla 2 format & utgåvor
American politics is typically a story about winners. The fading away of defeated politicians and political movements is a feature of American politics that ensures political stability and a peaceful transition of power. But American history has also been built on defeated candidates, failed presidents, and social movements that at pivotal moments did not dissipate as expected but instead persisted and eventually achieved success for the loser's ideas and preferred policies. With Legacies of Losing in American Politics, Jeffrey K. Tulis and Nicole Mellow rethink three pivotal moments in American political history: the founding, when anti-Federalists failed to stop the ratification of the Constitution; the aftermath of the Civil War, when President Andrew Johnson's plan for restoring the South to the Union was defeated; and the 1964 presidential campaign, when Barry Goldwater's challenge to the New Deal order was soundly defeated by Lyndon B. Johnson. In each of these cases, the very mechanisms that caused the initial failures facilitated their eventual success. After the dust of the immediate political defeat settled, these seemingly discredited ideas and programs disrupted political convention by prevailing, often subverting, and occasionally enhancing constitutional fidelity. Tulis and Mellow present a nuanced story of winning and losing and offer a new understanding of American political development as the interweaving of opposing ideas.
Visa hela texten

"Jeffrey Tulis and Nicole Mellow have written a brilliant book that offers an entirely fresh interpretation of American political development."--Sydney Milkis "LSE American Politics and Policy Blog" "Jeffrey Tulis and Nicole Mellow have written a great book that should be added to the short list of essential works on U.S. constitutional development. . . . [an account that] is powerful and illuminating."--Mark Tushnet "The New Rambler" "The book is subtle, rewarding, and full of insight, and it is now a must-read for anyone trying to understand the American political regime and its history."--Bryan Garsten "Political Theory" "This excellent and provocative book is a must-read for students of American political development, conservatism, and American politics more broadly."--William D. Adler "Political Science Quarterly" "Tulis and Mellow offer a nuanced history of the 'legacies of losing' in the US that profoundly challenges the way we think about three of the great losers of American politics: the Anti-Federalists, Andrew Johnson, and Barry Goldwater."--Richard Ellis "LSE American Politics and Policy Blog" "A breakthrough look at power and politics in America. Tulis and Mellow show, in fascinating detail, how some of history's great losers managed to lay the groundwork for future victories. This is an ambitious, authoritative, and unexpected book that fundamentally revises three critical episodes in American political history."--James A. Morone, Brown University "We who have challenged optimistic accounts of progressive American political development have only done a little to explain the mechanisms through which progress is restrained or reversed. Tulis and Mellow make a huge leap forward, provocatively contending that the very ideas, tactics, and coalitions that met with thundering defeats in the nation's most critical junctures have provided the means for the resurgence of their causes. A riveting argument that may well prove seminal in the future and is all too timely now."--Rogers M. Smith, University of Pennsylvania "Mellow and Tulis have pressured the canonical blind spots [in the field] of American Political Development--their points of 'maximum blindness'--to show how they also yield 'areas of great lucidity, ' upending our political vocabularies of winning and losing, success and failure."--Diane Rubenstein "Political Theory" "History, we all know, is written by the winners. What we typically fail to recognize is the extent to which history has been revised by the losers. This is the central insight of Legacies of Losing in American Politics, the fascinating new contribution to American political thought, American political development, and constitutional theory by Jeffrey K. Tulis and Nicole Mellow."--Steven Bilakovics "LSE American Politics and Policy Blog" "Legacies of Losing in American Politics is a significant scholarly work that will shape the intellectual debate for years to come."--Mark D. Brewer "Perspectives on Politics,"

Jeffrey K. Tulis teaches American politics and political theory at the University of Texas at Austin and is the author of several books, including The Rhetorical Presidency. Nicole Mellow is professor of political science at Williams College and the author of The State of Disunion.