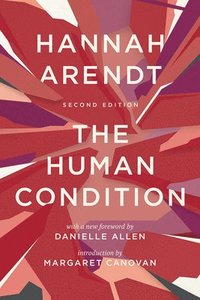 av Hannah Arendt
Häftad Engelska, 2018-10-05
199
Köp
Spara som favorit
Skickas inom 10-15 vardagar.
Fri frakt inom Sverige för privatpersoner.
Kan levereras innan jul!
Finns även som
Visa alla 1 format & utgåvor
The past year has seen a resurgence of interest in the political thinker Hannah Arendt, "the theorist of beginnings," whose work probes the logics underlying unexpected transformations-from totalitarianism to revolution. A work of striking originality, The Human Condition is in many respects more relevant now than when it first appeared in 1958. In her study of the state of modern humanity, Hannah Arendt considers humankind from the perspective of the actions of which it is capable. The problems Arendt identified then-diminishing human agency and political freedom, the paradox that as human powers increase through technological and humanistic inquiry, we are less equipped to control the consequences of our actions-continue to confront us today. This new edition, published to coincide with the sixtieth anniversary of its original publication, contains Margaret Canovan's 1998 introduction and a new foreword by Danielle Allen. A classic in political and social theory, The Human Condition is a work that has proved both timeless and perpetually timely.
Visa hela texten

"Arendt's most important philosophical work."--Richard Wolin "New Republic" "The combination of tremendous intellectual power with great common sense makes Arendt's insights into history and politics seem both amazing and obvious."--Mary McCarthy "New Yorker" "A great work of the mind and the imagination. . . . Arendt has done even more to prise open our oyster minds than she did in The Origins of Totalitarianism."--Philip Toynbee "Guardian"

Hannah Arendt is widely considered one of the most important thinkers of the twentieth century. The University of Chicago Press also publishes her Lectures on Kant's Political Philosophy and Love and Saint Augustine, as well as The Correspondence of Hannah Arendt and Gershom Scholem. Margaret Canovan is an English political theorist who has published widely on Arendt. Her books include The People and Hannah Arendt: A Reinterpretation of Her Political Thought. Danielle Allen is James Bryant Conant University Professor at Harvard University, and Director of Harvard's Edmond J. Safra Center for Ethics and the author, most recently, of Cuz: The Life and Times of Michael A.