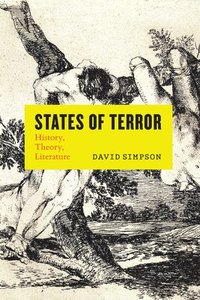 av David Simpson
Häftad Engelska, 2019-03-08
259
Köp
Spara som favorit
Skickas inom 7-10 vardagar.
Fri frakt inom Sverige för privatpersoner.
Finns även som
Visa alla 2 format & utgåvor
How have we come to depend so greatly on the words terror and terrorism to describe broad categories of violence? David Simpson offers here a philology of terror, tracking the concept's long, complicated history across literature, philosophy, political science, and theology--from Plato to NATO. Introducing the concept of the "fear-terror cluster," Simpson is able to capture the wide range of terms that we have used to express extreme emotional states over the centuries--from anxiety, awe, and concern to dread, fear, and horror. He shows that the choices we make among such words to describe shades of feeling have seriously shaped the attribution of motives, causes, and effects of the word "terror" today, particularly when violence is deployed by or against the state. At a time when terror-talk is widely and damagingly exploited by politicians and the media, this book unpacks the slippery rhetoric of terror and will prove a vital resource across humanistic and social sciences disciplines.
Visa hela texten

"When it comes to the history of ideas, Simpson does not disappoint. His slim but provocative book takes a wide-angle look at the idea and history of 'terror'. . . .The book's main strength is Simpson's impressive analysis of the 18th century in Western literature and culture, but he is equally adept at showing how 'terror' is a concept that functions within a web of language and meaning. He likewise shows persuasively that the word and its representations are not merely of this time, but of all time. This is the history of ideas at its absolute best."--David Lloyd, University of California, Riverside "Choice" "Simpson is a lucid and stylish writer who has accomplished the always difficult task of making a thoroughly scholarly work entirely readable and even compelling. The questions he poses serve to reorient our thinking, upsetting received assumptions about the historical continuity or commonsensicality of such apparently basic emotions or affects as fear, anxiety, panic, and terror. The reader, no matter how well versed in the general arguments or periods, constantly learns something new and often paradoxical or unexpected, whether about Greek philosophy or contemporary affect theory. A pleasure to read."--David Lloyd, University of California, Riverside "The word 'terror, ' translated across many languages and contexts, has left its mark on diverse literary traditions--tragedy, the Gothic novel, the sublime. Once the attribute of gods and kings, in the modern era it charts a course from the French Revolution to the 'war on terror, ' and at a certain point in that trajectory enters into an ambivalent symbiosis with 'terrorism.' Many cultural critics have addressed themselves to the later phases of this word's history, but, as far as I know, no one prior to David Simpson has taken on the task of untangling--insofar as this is possible--the entire philological knot that 'terror' represents for us. This powerful, wide-ranging study helps us reimagine the function of criticism in dark times."--Marc Redfield, author of The Rhetoric of Terror: Reflections on 9/11 and the War on Terror

David Simpson is distinguished professor and G. B. Needham Chair of English at the University of California, Davis. He is the author, most recently, of Romanticism and the Question of the Stranger.