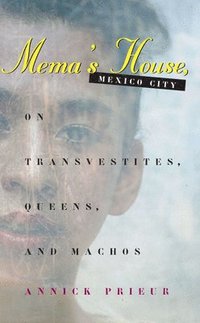 On Transvestites, Queens, and Machos

av Annick Prieur
Häftad Engelska, 1998-01-01
299
Köp
Spara som favorit
Skickas inom 7-10 vardagar.
Gratis frakt inom Sverige över 159 kr för privatpersoner.
Finns även som
Visa alla 2 format & utgåvor
Mema's house is in the poor quarter Nezahualcoyotl, a crowded urban space on the outskirts of Mexico City where people survive with the help of family, neighbours, and friends. This house is a sanctuary for a group of young homosexual men who meet to chat, flirt, listen to music, and smoke marijuana. Among the group are sex workers and transvestites with high heels, short skirts, heavy make-up, and voluminous hairstyles; and their partners, young, bisexual men, wearing T-shirts and worn jeans, short hair, and maybe a moustache. Mema, an AIDS educator and the leader of this gang of homosexual men, invited Annick Prieur, a European sociologist, to meet the community and conduct her fieldwork at his house. Prieur lived there for six months between 1988 and 1991, and she has kept in touch for more than eight years. As Prieur follows the transvestites in their daily activities - at their work as prostitutes or as hairdressers, at night having fun in the streets and in discos, on visits with their families and even in prisons, a story unfolds of love, violence, and deceit. Prieur analyzes the complicated relations between the effeminate homosexuals, most of them transvestites, and their partners, the masculine-looking bisexual men, asking why these particular gender constructions exist in the Mexican working classes, and how they can be so widespread in a male-dominated society, the very society from which the term "machismo" stems. Weaving empirical research with theory, Prieur presents new analytical angles on several concepts: family, class, domination, the role of the body, and the production of differences among men.
Visa hela texten