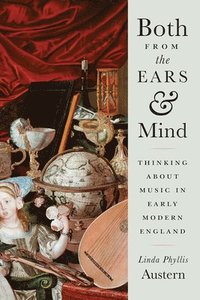 Both from the Ears and Mind

av Linda Phyllis Austern
Inbunden Engelska, 2020-08-28
629
Köp
Spara som favorit
Skickas inom 10-15 vardagar.
Fri frakt inom Sverige för privatpersoner.
Beställ boken senast måndag 30 november för leverans innan julafton
Finns även som
Visa alla 1 format & utgåvor
Both from the Ears and Mind offers a bold new understanding of the intellectual and cultural position of music in Tudor and Stuart England. Linda Phyllis Austern brings to life the kinds of educated writings and debates that surrounded musical performance, and the remarkable ways in which English people understood music to inform other endeavors, from astrology and self-care to divinity and poetics. Music was considered both art and science, and discussions of music and musical terminology provided points of contact between otherwise discrete fields of human learning. This book demonstrates how knowledge of music permitted individuals to both reveal and conceal membership in specific social, intellectual, and ideological communities. Attending to materials that go beyond music's conventional limits, these chapters probe the role of music in commonplace books, health-maintenance and marriage manuals, rhetorical and theological treatises, and mathematical dictionaries. Ultimately, Austern illustrates how music was an indispensable frame of reference that became central to the fabric of life during a time of tremendous intellectual, social, and technological change.
Visa hela texten

"The mental, experiential and musical landscapes of human beings in the 16th and 17th centuries were different from ours. Austern's latest book is an ambitious attempt to map out that territory in detail."-- "BBC Music Magazine" "Having undertaken a comprehensive survey of many and often little-known sources in manuscript and print, Austern has created an unequaled storehouse of ideas about music that circulated in early modern England. Her fascinating book practically overflows its covers with discourses of music's powers and effects, notably on the self and society, that reveal how this elusive topic lay virtually at the heart of the early modern English intellectual enterprise. Austern vividly portrays how, at a time of rapid religious and social change, urgent debates about music's role in worship were conducted even while music itself served as both a civilizing and disrupting influence on society. This book makes a major contribution to the expanding field of sound studies and to sensory history more generally."--Penelope Gouk, University of Manchester "If anyone in England from 1500 to 1700 has written about music, Austern has read it. Both from the Ears and Mind is a magnum opus that draws together twenty-five years of research and publication. No existing scholarship on ideas about music in early modern England has the range and the depth of Austern's. Musicology scholars will find in Austern a resource that will challenge and complicate received ideas about early modern tonality, harmony, rhythm, and performance."--Bruce Smith, University of Southern California "Both from the Ears and Mind is a marvelously valuable and stimulating guide to the many ways in which early modern thinkers contemplated music. It traces the importance of music through all areas of intellectual endeavor and draws upon an immense range of contemporary writings. No other analysis of this material is so encyclopedic, sophisticated, and deeply learned. Austern's book deserves to be read by everyone with an interest in music of the sixteenth and seventeenth centuries."--Christopher Marsh, Queens University Belfast

Linda Phyllis Austern is associate professor of musicology at Northwestern University. She is the author of Music in English Children's Drama of the Later Renaissance and editor of several books, most recently Beyond Boundaries: Rethinking Music Circulation in Early Modern England (with Candace Bailey and Amanda Eubanks Winkler).