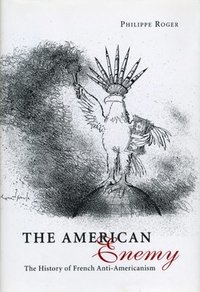 The History of French Anti-Americanism

av Philippe Roger
Inbunden Engelska, 2005-06-01
329
Bevaka
Spara som favorit
Bokens leverantör håller tillfälligt stängt på grund av Coronapandemin. Klicka "Bevaka" för att få ett mejl när boken går att beställa igen eller välj ett annat format nedan.
Finns även som
Visa alla 1 format & utgåvor
Georges-Louis Buffon, an eighteenth-century French scientist, was the first to promote the widespread idea that nature in the New World was deficient; in America, which he had never visited, dogs don't bark, birds don't sing, and - by extension - humans are weaker, less intelligent, and less potent. Thomas Jefferson, infuriated by these claims, brought a seven-foot-tall carcass of a moose from America to the entry hall of his Parisian hotel, but the five-foot-tall Buffon remained unimpressed and refused to change his views on America's inferiority. Buffon, as Philippe Roger demonstrates here, was just one of the first in a long line of Frenchmen who have built a history of anti-Americanism in that country, a progressive history that is alternately ludicrous and trenchant. The American Enemy is Roger's bestselling and widely acclaimed history of French anti-Americanism, presented here in English translation for the first time. With elegance and good humor, Roger goes back 200 years to unearth the deep roots of this anti-Americanism and trace its changing nature, from the belittling, as Buffon did, of the "savage American" to France's resigned dependency on America for goods and commerce and finally to the fear of America's global domination in light of France's thwarted imperial ambitions. Roger sees French anti-Americanism as barely acquainted with actual fact; rather, anti-Americanism is a cultural pillar for the French, America an idea that the country and its culture have long defined themselves against. Sharon Bowman's fine translation of this magisterial work brings French anti-Americanism into the broad light of day, offering fascinating reading for Americans who care about our image abroad and how it came about.
Visa hela texten

"Roger has assembled a gallery of all the negative commonplaces, stereotypes and cliches about the United States: bad climate, savage natives, Indian-killers, slavedrivers, robber barons, capitalist fat cats, unlivable cities, soulless scientists, etc. The caricatures are occasionally drawn by some of France's finest pens, and they get our attention. As this culture of complaint builds and ramifies, we witness the birth and development of an intellectual reflex." - Stephen Sartarelli, Nation; "A brilliant and exhaustive guide to the history of French Ameriphobia." - Simon Schama, New Yorker"

Philippe Roger is a professor at the Ecole des Hautes Etudes en Sciences Sociales in Paris, the editor in chief of Critique, the author of numerous books on French history and culture, and a member of the Centre National de la Recherche Scientifique. Sharon Bowman was awarded the Prix Amic de Soutien a la Creation Litteraire by the Academie Francaise in 2002.