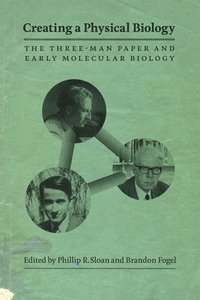 av Phillip R Sloan, Brandon Fogel
Häftad Engelska, 2011-12-15
441
Köp
Spara som favorit
Skickas inom 7-10 vardagar.
Gratis frakt inom Sverige över 159 kr för privatpersoner.
Finns även som
Visa alla 2 format & utgåvor
In 1935 geneticist Nikolai Timofeeff-Ressovsky, radiation physicist Karl G. Zimmer, and quantum physicist Max Delbruck published "On the Nature of Gene Mutation and Gene Structure", known subsequently as the "Three-Man Paper". This seminal paper advanced work on the physical exploration of the structure of the gene through radiation physics and suggested ways in which physics could reveal definite information about gene structure, mutation, and action. Representing a new level of collaboration between physics and biology, it played an important role in the birth of the new field of molecular biology. The paper's results were popularized for a wide audience in the "What is Life?", lectures of physicist Erwin Schrodinger in 1944. Despite its historical impact on the biological sciences, the paper has remained largely inaccessible because it was only published in a short-lived German periodical. "Creating a Physical Biology" makes the "Three Man Paper" available in English for the first time. Brandon Fogel's translation is accompanied by an introductory essay by Fogel and Phillip R. Sloan and a set of essays by leading historians and philosophers of biology that explore the context, contents, and subsequent influence of the paper, as well as its importance for the wider philosophical analysis of biological reductionism.
Visa hela texten

"An important contribution to the students of the thinking of geneticists in the decades prior to Watson and Crick's model DNA of 1953."--Michel Morange, Centre Cavailles, Ens "Studies in History and Philosophy of Biological and Biomedical Sciences" "Not only do [Sloan and Fogel] provide a fine translation of the ["Three-Man Paper"] from German to English, but with their collaborators they also help the reader to put it in its scientific, philosophical, and social context."--Michel Morange, Centre Cavailles, Ens "Journal of the History of Biology" "This is a much-needed work and should provoke deep interest and discussions for those who are curious about the history and philosophy of science and the origins of molecular biology."--Elof Axel Carlson, Stony Brook University "Quarterly Review of Biology" "This book should be required reading for anyone with a serious interest in the history of molecular biology. The Three-Man Paper is beautiful reading, but it is now known mainly from the presentation of its principal claims in Erwin Schroedinger's What Is Life? (1944), which misrepresented the paper's stance toward reductionism. The interpretive essays collected here review that issue and contribute to an ongoing reappraisal of pre-1940 research that helped shape what became molecular biology long before DNA was recognized as the genetic material or the structure of the double helix reshaped our understanding of biological processes. Perhaps surprisingly, the essays also show that the Three-Man Paper remains relevant to debates on reductionism even today."--Richard M. Burian, Virginia Polytechnic Institute and State University "Quarterly Review of Biology" "Seventy-six years ago appeared a paper in German about the action of X-rays on the genetic material, written by three authors, hence known as the 'Three-Man Paper.' Here in Creating a Physical Biology, for the first time, is an excellent English translation of that paper, and alongside it are five essays evaluating its historical significance and philosophical claims. Why so much fuss about a little-known old paper? Read about it, and enter the scientific world of the physics and biology of the 1930s. Away with the retrospect of subsequent knowledge! Find here the Three-Man Paper's context in 1930s Berlin, the target theory, the 1930s gene, and the relation between physics and biology. A very refreshing reevaluation."--Robert Olby, University of Pittsburgh "Quarterly Review of Biology" "[I]ntriguing." --Michael A. Goldman "Nature" "[I]nformative and illuminating. . . . Creating a Physical Biology is a great book with deeply insightful contributions from renowned scholars, a book that will continue to inspire and inform scholars, teachers, and students alike for generations to come."--Neeraja Sankaran, Yonsei University, Seoul "British Journal for the History of Science" "Creating a Physical Biology offers an accessible version of the Three-Man Paper, a key historical document in the history of biology, with nuanced historical analyses and philosophically sophisticated discussions on the paper itself. This book will deservedly attract serious audience in the history and philosophy of science, especially those who are interested in the history of the concept of life and genes in early molecular biology, the relationship between biology and physics, and philosophical issues in reduction and causality in biology."--Doogab Yi "Metascience"