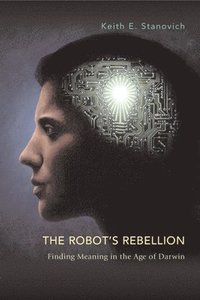 Finding Meaning in the Age of Darwin

av Keith E Stanovich
Inbunden Engelska, 2004-05-01
269
Köp
Spara som favorit
Kan tyvärr inte längre levereras innan julafton.
Finns även som
Visa alla 1 format & utgåvor
The idea that we might be robots is no longer the stuff of science fiction; decades of research in evolutionary biology and cognitive science have led many esteemed thinkers and scientists to the conclusion that, following the precepts of universal Darwinism, humans are merely the hosts for two replicators (genes and memes) that have no interest in us except as conduits for replication. Accepting and now forcefully responding to this disturbing idea that precludes the possibilities of morality or free will, among other things, Keith Stanovich here provides the tools for the "robot's rebellion," a program of cognitive reform necessary to advance human interests over the limited interest of the replicators. He shows how concepts of rational thinking from cognitive science interact with the logic of evolution to create opportunities for humans to structure their behavior to serve their own ends. These evaluative activities of the brain, he argues, fulfill the need that we have to ascribe significance to human life. Only by recognizing ourselves as robots, argues Stanovich, can we begin to construct a concept of self based on what is truly singular about humans: that they gain control of their lives in a way unique among life forms on Earth - through rational self-determination.
Visa hela texten

"Stanovich offers readers a sweeping tour of theory and research, advancing a programme of 'cognitive reform' that puts human interests first.... By making the point that cognition is optimized at the level of genes, not of individuals, Stanovich puts a fresh spin on the familiar claim that people are sometimes woefully irrational.... With The Robot's Rebellion, he sets himself apart from unreflective thinkers on both sides of the divide by taking evolutionary accounts of cognition seriously, even as he urges us to improve on what evolution has wrought." - Valerie M. Chase, Nature "According to Stanovich, we're only just beginning to grapple with the deep consequences of Darwin's theory of natural selection. One such consequence, Richard Dawkins's theory of the 'selfish gene,' implies that living creatures are mere vehicles constructed to facilitate the survival and replication of genes. While Stanovich...agrees with the basic idea of the selfish gene, he finds fault with the conclusion that we are simply at its mercy....A deep exploration of the philosophical and scientific ramifications of Darwinian evolution." - Publishers Weekly"