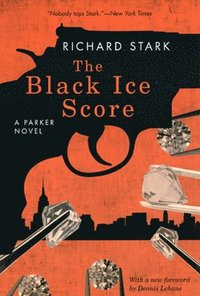 av Richard Stark, Dennis Lehane
Häftad Engelska, 2010-05-25
145
Köp
Spara som favorit
Skickas inom 7-10 vardagar.
Gratis frakt inom Sverige över 159 kr för privatpersoner.
A corrupt African colonel has converted half his country's wealth into diamonds and smuggled them to a Manhattan safe house. Four upstanding citizens plan to rescue their new nation by stealing the diamonds back?with the help of a ?specialist??Parker, that is. He has the best references in town. Will Parker break his rule against working with amateurs and help them because his woman would be disappointed if he doesn?t? Or because three hired morons have threatened to kill him and his woman if he does? They thought they were buying an advantage, but what they get is a predated death certificate. ?Crime fiction stripped down?as it was meant to be. . . . Oh, how the pages keep turning.??Philadelphia Inquirer ?Old master that he is, Stark does all of them one better.??Los Angeles Times
Visa hela texten

"Fiercely distracting . . . . Westlake is an expert plotter; and while Parker is a blunt instrument of a human being depicted in rudimentary short grunts of sentences, his take on other characters reveals a writer of great humor and human understanding."--John Hodgman "Parade" "Whether early or late, the Parker novels are all superlative literary entertainments." --Terry Teachout "Weekly Standard" "Whatever Stark writes, I read. He's a stylist, a pro, and I thoroughly enjoy his attitude." --Elmore Leonard "New York Times" "Westlake knows precisely how to grab a reader, draw him or her into the story, and then slowly tighten his grip until escape is impossible." --Marilyn Stasio "Washington Post" "The UC Press mission, to reprint the 1960s Parker novels of Richard Stark (the late Donald Westlake), is wholly admirable. The books have been out of print for decades, and the fast-paced, hard-boiled thrillers featuring the thief Parker are brilliant." --H. J. Kirchoff "Globe and Mail" "The University of Chicago Press has recently undertaken a campaign to get Parker back in print in affordable and handsome editions, and I dove in. And now I get it."--Josef Braun, Vue Weekly --Josef Braun "Vue Weekly" "Richard Stark's Parker novels . . . are among the most poised and polished fictions of their time and, in fact, of any time." --John Banville "Bookforum" "Richard Stark writes a harsh and frightening story of criminal warfare and vengeance with economy, understatement and a deadly amoral objectivity--a remarkable addition to the list of the shockers that the French call roman noirs." --Anthony Boucher "New York Times Book Review" "Parker is refreshingly amoral, a thief who always gets away with the swag." --Stephen King "Entertainment Weekly" "Parker is a true treasure. . . . The master thief is back, along with Richard Stark." --Marilyn Stasio "New York Times Book Review" "Parker . . . lumbers through the pages of Richard Stark's noir novels scattering dead bodies like peanut shells. . . . In a complex world [he] makes things simple." --William Grimes "New York Times" "If you're a fan of noir novels and haven't yet read Richard Stark, you may want to give these books a try. Who knows? Parker may just be the son of a bitch you've been searching for." --John McNally "Virginia Quarterly Review" "I wouldn't care to speculate about what it is in Westlake's psyche that makes him so good at writing about Parker, much less what it is that makes me like the Parker novels so much. Suffice it to say that Stark/Westlake is the cleanest of all noir novelists, a styleless stylist who gets to the point with stupendous economy, hustling you down the path of plot so briskly that you have to read his books a second time to appreciate the elegance and sober wit with which they are written." --Terry Teachout "Commentary" "Elmore Leonard wouldn't write what he does if Stark hadn't been there before. And Quentin Tarantino wouldn't write what he does without Leonard. . . . Old master that he is, Stark does all of them one better." --Marilyn Stasio "Los Angeles Times" "Donald Westlake's Parker novels are among the small number of books I read over and over. Forget all that crap you've been telling yourself about War and Peace and Proust--these are the books you'll want on that desert island." --Lawrence Block "Los Angeles Times"

Richard Stark was one of the many pseudonyms of Donald E. Westlake (1933-2008), a prolific author of noir crime fiction. In 1993 the Mystery Writers of America bestowed the society's highest honor on Westlake, naming him a Grand Master.