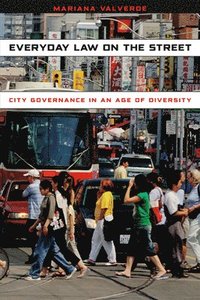 Everyday Law on the Street

City Governance in an Age of Diversity

av Mariana Valverde
Häftad Engelska, 2012-11-16
219
Köp
Spara som favorit
Skickas inom 7-10 vardagar.
Fri frakt inom Sverige för privatpersoner.
Finns även som
Visa alla 2 format & utgåvor
Toronto prides itself on being "the world's most diverse city," and its officials seek to support this diversity through programs and policies designed to promote social inclusion. Yet this progressive vision of law often falls short in practice, limited by problems inherent in the political culture itself. In "Everyday Law on the Street", Mariana Valverde brings to light the often unexpected ways that the development and implementation of policies shape everyday urban life. Drawing on four years spent participating in council hearings and civic association meetings, and shadowing housing inspectors and law enforcement officials as they went about their day-to-day work, Valverde reveals a telling transformation between law on the books and law on the streets. She finds, for example, that some of the democratic governing mechanisms generally applauded - public meetings, for instance - actually create disadvantages for marginalized groups, whose members are less likely to attend or articulate their concerns. As a result, both officials and citizens fail to see problems outside the point of view of their own needs and neighborhood. Taking issue with Jane Jacobs and many others, Valverde ultimately argues that Toronto and other diverse cities must reevaluate their allegiance to strictly local solutions. If urban diversity is to be truly inclusive - of tenants as well as homeowners, and recent immigrants as well as longtime residents - cities must move beyond microlocal planning and embrace a more expansive, citywide approach to planning and regulation.
Visa hela texten

"[Valverde] uses numerous colourful anecdotes and case studies to illustrate how local laws actually work. . . . The book is an important contribution to the field of urban studies and law; the unique approach used reveals much that is dysfunctional with modern municipal law and planning."--Nicholas Blomley, Simon Fraser University "Canadian Geographer" (9/15/2014 12:00:00 AM) "In an era when cities across the globe are championing diversity, why are we witnessing an increase in inequality and social exclusion? Inspired by this ill-understood paradox, legal sociologist Mariana Valverde sets out to find the roots of this contradiction in her hometown of Toronto--an oft-touted icon of urban multiculturalism. What she finds is a set of structures and practices of municipal governance that, by promoting a culturally specific definition of diversity, is actually perpetuating long-held inequalities. . . . Based on four years of on-the-ground research shadowing local officials and attending civic meetings, Valverde creatively combines anecdotes, case studies, and academic research to expose the ways in which local governance structures sew social exclusion into the fabric of 'urban experience.'"--Nicholas Blomley, Simon Fraser University "LSE Review of Books" (11/8/2013 12:00:00 AM) "Valverde examines an oft-overlooked area of urban policy: code enforcement, and how it reflects larger political considerations in urban life. She finds that Toronto, which prides itself on being one of the most diverse cities in the world, is a city where the law and its enforcement are often inconsistent. . . . Public hearings actually have a negative impact on the poor and other marginalized groups who fail to participate or do not understand how to effectively participate in the process. Recommended."--Nicholas Blomley, Simon Fraser University "Choice" (11/8/2013 12:00:00 AM) "Valverde grapples with the ways that municipalities regulate space and the related largely unseen and unexamined issues that affect nearly everyone who lives in a city. . . . Distancing herself from Jane Jacobs, [she] compellingly argues that bringing back city planning is the best path to achieving more diverse and inclusive outcomes."--Nicholas Blomley, Simon Fraser University "Perspectives on Politics" (4/6/2015 12:00:00 AM) A beautifully written and ingenious exploration of the day-to-day, on-the-ground enforcement of municipal regulations--and, hence, urban governance--in Toronto. The topics are wide-ranging and include affordable housing and land use issues, the regulation of street-food vendors, and the taxi permit system, among others. It is an excellent empirical study of what law and society scholars call 'law in action' and the various and often unpredictable ways such law veers from the ostensible intentions of those who write the law in the books.--Kitty Calavita, University of California, Irvine Studies of urban communities rarely recognize the role of law, but here eminent sociolegal theorist Mariana Valverde turns her attention to the way laws from the local to the international shape urban life. This book challenges Jane Jacobs's idea that cities should be organized as small, self-governing villages, arguing instead that law is critical in dealing with the inequalities and exclusions of highly diverse cities. Ethnographically rich, readable, and engaging, this book is essential for understanding the contemporary city. --Sally Engle Merry, New York University Mariana Valverde has a remarkable gift for revealing the unexpected amidst the taken-for-granted. Here, she takes us deep into the little-understood--yet crucially important--world of Toronto's everyday urban law, governing taxi licenses, hot dog stands, garden weeds, and rooming houses. In so doing, she reveals the systematic ways in which urban law works against the social and cultural diversity that cities profess to embrace.

Mariana Valverde is professor in and director of the Centre for Criminology and Sociolegal Studies at the University of Toronto. She is the author of several books, including Law's Dream of a Common Knowledge.