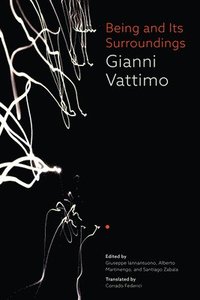 Being and Its Surroundings

av Gianni Vattimo, Giuseppe Iannantuono, Alberto Martinengo, Santiago Zabala
Inbunden Engelska, 2021-08-15
429
Köp
Spara som favorit
Kan levereras innan julafton!
Gianni Vattimo, one of Europe's foremost contemporary philosophers and most famously associated with the concept of weak thought, explores theoretical and practical issues flowing from his fundamental rejection of the traditional Western understanding of Being as an absolute, unchanging, and transcendent reality. The essays in this book move within the surroundings of Being without constructing a systematic, definitive analysis of the topic. In Being and Its Surroundings, Vattimo continues his career-long exploration of the philosophy of Martin Heidegger, in particular his repudiation of metaphysics with its presupposition of the existence of permanent, universal truth, and that of Friedrich Nietzsche, with its promotion of nihilism. One consequence of problematizing the idea of an attainable truth is the relativization of values and cultures. In the face of the death of God - or the absence of a transcendent guarantor of the validity of human judgments - we have the postmodern tendency to see all value systems and assertions of truth as purely subjective, and to suggest that "anything goes," which Nietzsche called passive nihilism. Vattimo advocates a more active response as he challenges all forms of authoritarianism in the world today. He brings his intellectual acumen to bear on such urgent issues as globalization, the clash of civilizations and terrorism, the crisis of democracy, and the relevance of orthodox religion. Rather than endorse dogmatism or indifference and detachment from social engagement in the name of relativism, Vattimo opts for the path of meaningful dialogue and a search for a mediated consensus based on reason, with all its limitations.
Visa hela texten

"Gianni Vattimo calls this book most felicitously a 'theological-philosophical breviary' and not a 'treatise.' Indeed, this is an exemplary exercise of the piety of a secularist who worships our hermeneutical debts, gratitude, and unfinished task of interpreting the world in more humane and liberating ways. This little book, full of history, life, and philosophy, is Vattimo at his best. He has been a witness and an actor in twentieth-century philosophy, and thus this book also reads as his philosophical testament." Eduardo Mendieta, Pennsylvania State University "Being and Its Surroundings charts a path for the politicization of hermeneutics. Gianni Vattimo's hermeneutic communism fervently critiques new philosophical realisms with its insistence on a militant philosophy that runs against the grain of globalization. He argues for nothing short of a reclaiming of consciousness by which to understand how practices of interpretation change the objective world. The implications of Vattimo's ontology of revolution are gripping and demand widespread consideration." Amanda Boetzkes, University of Guelph