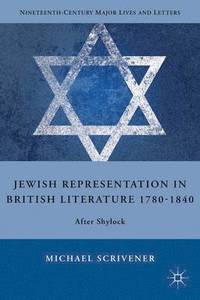 "[A]n interesting and enlightening read . . . this book is an important addition to scholarly debates concerning the Other and the Romantic imagination." - The BARS Review "Scrivener's Jewish Representation in British Literature is the most encyclopedic study to date depicting Jews and Judaism during the Romantic period. Although it was once 'routine' (12) to overlook representations of Jews and works by Jewish writers in literary studies, scholarship on this subject in the last twenty years has created a much different critical terrain. Yet, as Scrivener demonstrates, much work remains to be done. The sheer volume of primary texts discussed here that have been little explored, or entirely overlooked, is remarkable. In this way, Jewish Representation in British Literature will be an invaluable sourcebook for further research." - The Wordsworth Circle "Scrivener's examination of Jewish representations in Romantic literature is wise and wide-ranging. His assessments are sober and trustworthy and the range of texts he considersis refreshing. He highlights the oft-neglected work of Levy Alexander and 'Jew' King, as well as the novels and poetry of King'sdaughters Charlotte and Sophia, andexamineswidely circulated textual representations of Jews - in court proceedings and popular songs - that have escaped attention in previous scholarship.This is a richly rewarding, well-crafted study." - Todd M. Endelman, William Haber Professor of Modern Jewish History, University of Michigan "An engaging and comprehensive overview of the literary portraits of British Jews, one that demonstrates that such representations are more nuanced than the labels anti- or philo-Semitic might suggest . . . This richly populated landscape is well worth the trip." - Michael Galchinsky, Professor of English, Georgia State University "Scrivener meticulously exposes 'a spectrum of prejudice and stereotypical perceptions' running as a noxious thread through English culture of the Romantic era. His new book serves both as an important historical reminder and as a wake-up call that indifference and bigotry are no less the components of today's anti-Semitism. Scrivener's surefooted handling of present-day cultural discourse as a gateway to interpreting the past is impressive and original." - Frank Felsenstein, Reed D. Voran Honors Distinguished Professor of Humanities, Ball State University

MICHAEL SCRIVENER is a Professor of English at Wayne State University, USA. He has published books on Percy Shelley (Radical Shelley, 1982), John Thelwall (Seditious Allegories, 2001; Two Plays by John Thelwall, 2006), Romantic verse in political periodicals (Poetry and Reform, 1992), and cosmopolitanism (Cosmopolitan Ideal in the Age of Revolution and Reaction, 1776-1832, 2007). He was awarded the 2006 Distinguished Scholar Award by the Keats-Shelley Association of America and received a Guggenheim Fellowship in 2007-08.

Jewish Representations, Literary Criticism and History 1656 and the Origins of Anglo-Jewish Writing The Pedlar The Moneylender The Jew's Daughter Exiles and Prophets Working Through Stereotypes: After Shylock?