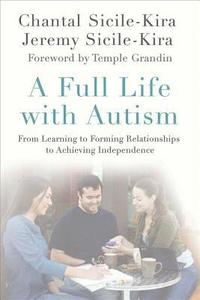 A Full Life with Autism

From Learning to Forming Relationships to Achieving Independence

av Chantal Sicile-Kira, Jeremy Sicile-Kira
Häftad Engelska, 2012-04-05
179
Köp
Spara som favorit
Skickas inom 10-15 vardagar.
Fri frakt inom Sverige för privatpersoner.
In the next five years, hundreds of thousands of children with autism spectrum disorder will reach adulthood. And while diagnosis and treatment for children has improved dramatically in recent years, parents want to know: What happens to my child when I am no longer able to care for or assist him? In this ground-breaking book, autism expert Chantal Sicile-Kira and her son Jeremy offer real solutions to a host of difficult questions, including how young adults across the autism spectrum can: negotiate adult life in this new economy where adult service resources are scarce cope with the difficulties of living apart from the nuclear family find and keep a job that provides meaning, stability and an income discover the joys of fulfilling relationships
Visa hela texten

Praise for Autism Life Skills: 'Chantal Sicile-Kira has done a beautiful job of putting the voices of many people on the spectrum into one book.' - Temple Grandin, author of Animals in Translation and Thinking in Pictures

Chantal Sicile-Kira is an award-winning author, columnist, and speaker on autism. The author of four other books, Sicile-Kira writes for The Huffington Post andPsychologyToday.com. Her story has been covered by a wide variety of media, including NPR, PBS, MTV, the Chicago Tribune, Newsweek, and Fox News.Jeremy Sicile-Kira was diagnosed as severely autistic when he was born in 1989. In 2010, he gave a commencement speech at his high school graduation. Jeremy writes for autism magazines, AutismCollege.com, and was featured in Newsweek. In 2007, Jeremy was on MTV's True Life in the episode, "I Have Autism," which won a 2007 Voice Award.Temple Grandin is the bestselling author of Animals in Translation, among others.

Jeremy's Story - Making the Impossible Possible Seeing the Potential of Your Child and Helping Them Realize it Circle of Support - Absolute Necessity of Creating a Support Group Having a Fulfilling Emotional Life Finding the Right Living Arrangements - From In-house Care to Independence The Joy of Learning - Creating the Right Educational Environment Personal Needs: Friends, Relationships, and Love & Sex Search for Normalcy - Gauging Success for Yourself Planning for the Future