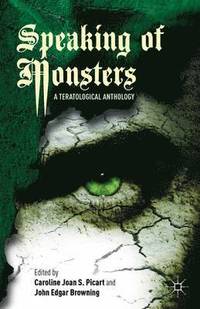 "This book is a must-read for students and scholars of teratology, monsters, the fantastic, and the detested other. Spanning a fascinating gulf of disciplines and genres, the authors illustrate just how interconnected we are with the monsters in our midst and the extent to which our understandable desire to define ourselves in opposition to the monstrous both creates and destroys the barriers between the human and the other. This book will change the way you think about crime, victimhood, knowledge, the normal, and our own place in the universe. From Dracula to the Holocaust, from gender to disability, this book challenges our own belief in the possibility of self-knowledge and questions the foundations of our self-defined humanity.' - Danaya C. Wright, Clarence J. TeSelle Professor of Law, Levin College of Law, University of Florida "All too often topics are betrayed in their treatment - creativity is discussed unimaginatively, art is approached unartfully or even artlessly, philosophy itself taken up thoughtlessly (at least without sufficiently sustained, probing thoughtfulness). Not so in this instance. Indeed, the category of monstrosity is itself monstrous. It is at once dependent upon traditional distinctions between the normal and a forever shifting array of opposites and in conflict with those historically entrenched dichotomies. The essays in this volume exhibit in detail the monstrous - in the sense of both the frighteningly huge and fiercely unsettling - force of this philosophical category. They do so in reference to a broad spectrum of cultural phenomena. The editors' finely crafted introduction however provides a useful map to this vast terrain.' - Vincent Colapietro, Liberal Arts Research Professor of Philosophy, The Pennsylvania State University 'This collection of essays offers more than a unique contribution to social theory - it is a comprehensive framework for understanding how humans construct otherness. The work is critical for law since judges, police, and other legal actors repeatedly construct the criminal as monster, which lays the foundation for punishment that knows no bounds, including death. In an age of mass incarceration and fears of terrorism, this work is as timely as it is fascinating." - SpearIt, Assistant Professor of Law, Saint Louis University, School of Law