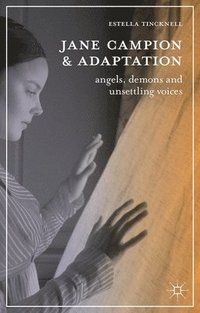 'Estella Tincknell has a keen eye for detail and with it she inspires her readers to see Campion's oeuvre afresh. In this book, she brings a welcome and finely wrought focus to the multilayered role of adaptation in Campion's cinema. Through her detailed reassessment of key films, Tincknell discovers a further claim for Campion's distinction and in the process succeeds in transporting her collected works to another order again.' - Deb Verhoeven, Chair in Media and Communication, Deakin University, Australia 'Sensitive and thoughtful in her close textual analysis, Estella Tincknell makes the case for seeing Jane Campion's films afresh through the director's perverse playfulness with texts, myths and genres, insightfully articulated through Tincknell's attention to the multiple 'voices' in each of Campion's films. Constructing the filmmaker's authorship as distinctive in its adaptive and collaborative processes, this book is a welcome addition to the growing collection of works on Campion and her oeuvre.' - Shelley Cobb, Lecturer in English and Film, University of Southampton, UK

Estella Tincknell is Reader and Associate Professor in Film and Culture at the University of the West of England, UK. She is an experienced teacher and researcher in the areas of film, media and cultural studies.