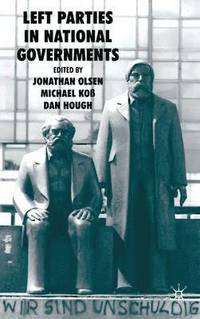 'Political science's neglect of the (radical) Left since the end of the Cold War has been exceptionally short-sighted, ignoring the movement of many formerly marginal parties into the mainstream and increasingly into national government. This volume goes a considerable way towards redressing the balance. It is based on uniformly excellent contributions from a broad range of established and emerging scholars. These focus on the most significant European Left parties, the strategic choices open to them and the results of increasing participation in coalitions in an empirically-rich and theoretically-informed fashion. Overall, this intriguing volume demonstrates that although the Left remains an ideological party family, it is increasingly coalitionable and as pragmatic in its evaluation of governing possibilities as any other party family. The book demonstrates that the Left should be taken seriously, and is a must-read for any Party scholar.' - Luke March, Senior Lecturer in Soviet and Post-Soviet Politics, University of Edinburgh, UK

From Pariahs To Players? Left Parties In National Government; J.Olsen , D.Hough & M.Ko? The Norwegian Socialist Left Party; Office-Seekers in the Service of Policy?; J.Olsen The French Extreme Left and its Suspicion of Power; D.Bell Between a Rock and a Hard Place; The Governing Dilemmas of Rifondazione Comunista; J.Newell A Poisoned Chalice? Finland's Left Alliance and the Perils of Government; R.Dunphy The Spanish United Left - The Belated and Troublesome Transition from Policy- to Office-Seeking; T.Verge Close to, but Still Out of, Government; The Swedish Vansterpartiet; M.Koss The Danish Socialist People's Party; Still Waiting After All These Years; D.A.Christensen From Pariah to Prospective Partner? The German Left Party's Winding Path Towards Government; D.Hough Ready to Get Their Hands Dirty; The Socialist Party and Groenlinks in the Netherlands; D.Keith Conclusion. Left Parties in National Governments; J.Olsen , D.Hough & M.Ko?