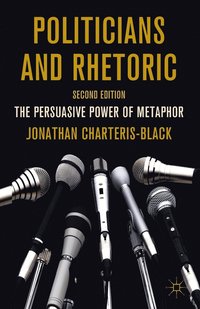 The Persuasive Power of Metaphor

av Jonathan Charteris-Black
Häftad Engelska, 2011-10-26
759
Köp
Spara som favorit
Skickas inom 3-6 vardagar.
Fri frakt inom Sverige för privatpersoner.
Finns även som
Visa alla 3 format & utgåvor
This analysis of the rhetoric of nine successfully persuasive politicians explains how their use of language created credible and consistent stories about themselves and the social world they inhabit. It explores their use of metaphors, their myths and how language analysis helps us to understand how politicians are able to persuade.
Visa hela texten

'This book is a fascinating exercise in the art of critical metaphor analysis of political speeches,including recent speeches by G W Bush and Obama. It addresses the vital need to raise awareness of metaphor's role in myth making, simplification by binary thinking, and affective evaluation, which often operate at an unconscious level for the audiences of political speeches. Analysis of metaphor along with other rhetorical schemes such as repetition,chiasmus and rhetorical questions,is well integrated into the author's model of political rhetoric/persuasion. The second edition helpfully includes several new references to recent work on metaphor and ideology.' - Andrew Goatly,Lingnan University,China 'In an age of growing distrust in politicians, their promises, their speeches, and their decisions, Jonathan Charteris-Black succeeds in convincing us of the 'complex art of rhetoric'. Some politicians' speeches have become salient elements of collective experiences, they are repeated over and over again, they are quoted and re-contextualised. The precise, detailed and careful analyses of speakers, speeches, and the images (metaphors) employed over decades and centuries make it abundantly clear that the genre of speeches retains its important role in spite and also perhaps because of the new media and new forms of politics. This innovative and very well written book is essential reading for all who want to understand how 'politics functions'.' - Ruth Wodak, Distinguished Professor of Discourse Studies, Lancaster University, UK 'Overall...this book is highly recommended for readers interested in questions of political discourse or language, particularly given its methodological contribution to a field dominated by issues and texts of abstract theorisation.'- Lee Jarvis, Political Studies Review 'This book will interest those fascinated with linguistics, rhetoric and political communication. It can also serve as a guide for those wary of political 'spin' who want to develop critical skills in discerning ethical integrity from nefarious intention. The book provides lucid insight into the way metaphors and political myths are developed by politicans seeking to achieve an intended effect. The artful use of language, Chateris-Black shows, can be incredibly persuasive.' LSE Blog

JONATHAN CHARTERIS-BLACK is Professor of Linguistics at the University of the West of England, UK. He is the author of Corpus Approaches to Critical Metaphor Analysis (2004); Politicians and Rhetoric: The Persuasive Power of Metaphor (2005); The Communication of Leadership (2010) and (with Seale, C) Gender and the Language of Illness (2010) as well as numerous other articles and book chapters.

Preface Style Conventions Persuasion, Speech Making and Rhetoric Metaphor in Political Discourse Winston Churchill: Metaphor and Heroic Myth Martin Luther King: Messianic Myth Enoch Powell: the Myth of the Oracle Ronald Reagan and Romantic Myth: 'From the swamp to the stars' Margaret Thatcher and the Myth of Boedicia Bill Clinton and the Rhetoric of Image Restoration Tony Blair and Conviction Rhetoric George Bush and the Rhetoric of Moral Accounting Obama and the Myth of the American Dream Myth, Metaphor and Leadership Appendices Bibliography Index of Conceptual Metaphors Index