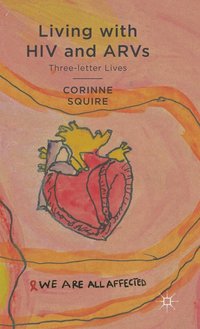 Living with HIV and ARVs

av Professor Corinne Squire
Inbunden Engelska, 2013-11-26
1219
Köp
Spara som favorit
Skickas inom 10-15 vardagar.
Fri frakt inom Sverige för privatpersoner.
Finns även som
Visa alla 1 format & utgåvor
This book explores the possibilities and difficulties of living with HIV and ARVs, or antiretroviral treatment, today. It draws on HIV-positive people's stories from both the UK and the South African epidemics and offers a deep understanding of the continuing difficulties of living with HIV and the effective strategies for coping that have evolved.
Visa hela texten

"Corinne Squire delves into very touching issues related to living with HIV in the treatment possibility era and what some have come to call the era of a possible AIDS free generation [...] This book will enable us to consider issues of social justice, where we are forced to take account of the context of ambiguity that HIV positive people have to live with as part of their three letter lives in this era of optimism." - Psychology in Society "Squire's path-breaking study of the possibilities and difficulties facing people on ART in Europe and Africa consolidates her status as an international leader in academic and policy debates. It poses a stark challenge to the growing swell of glib claims that the problem of HIV/AIDS has been 'solved' by the advent of drug treatments." - Catherine Campbell, Professor of Social Psychology, London School of Economics, UK "AIDS and HIV have been around now for over 30 years; we have moved from a time of crisis and fear to a time of the routine and normal. In this challenging study Corinne Squire develops her earlier ground breaking comparative research into HIV in South Africa by updating and contrasting it with interviews in the UK. With clarity, compassion and narrative empathy, she leads us into the fragile worlds of those continuing their daily struggles of living with HIV. Theoretically sophisticated, politically informed and engagingly written, this informative and insightful book is a must read for all those concerned with HIV issues."- Ken Plummer, Emeritus Professor of Sociology, University of Essex, UK "Professor Squire examines the concrete effects of the current 'optimism' about ending the AIDS epidemic. Using narrative analysis of persons living with HIV in two communities she has worked within for more than two decades, Squire shows the dissonance between public representation of the 'naturalness' of HIV and lived experience of those who live 'three letter lives' of increasingly intensified medicalization. As with her earlier works, this is a 'must read' for public health officials and critical social scientists involved in the current debates about the value and feasibility of 'treatment as prevention.'" - Cindy Patton, Professor of Sociology, Simon Fraser University, Canada

Corinne Squire is Professor of Social Sciences and Co-Director, Centre for Narrative Research, University of East London, UK. Her research interests are in HIV and citizenship, subjectivities and culture, and narrative research. Her publications include HIV in South Africa: HIV technologies in international perspective (with Davis) and Doing Narrative Research (with Andrews and Tamboukou).

PART I: LIVING WITH HIV IN THE TREATMENT POSSIBILITY ERA 1. Why the Three Letters Matter 2. From HIV's Exceptionalism to HIV's Particularity PART II: BEING NATURALISED, BEING LEFT BEHIND 3. Being Naturalised 4. When the Drugs Do Work: The Medicalised HIV Citizen 5. A Long-Term Condition: HIV's Normalisation 6. Investing in the Pandemic: the Marketised HIV Citizen 7. Being Left Behind PART III: 'LIVING ON' AND 'LIVING WITH' HIV: THE PARTICULARITIES OF EPIDEMICS 8. 'Living On': Three-Letter Lives in the UK 9. 'Living With' HIV: Three-Letter Lives in South Africa 10. Hopeful Futures, Inertial Histories and the Complex Present