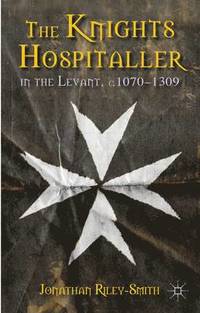 av Professor Jonathan Riley-Smith
Inbunden Engelska, 2012-05-31
1239
Köp
Spara som favorit
Skickas inom 5-8 vardagar.
Fri frakt inom Sverige för privatpersoner.
As one of the greatest of the military orders that were generated in the Church, the Order of the Hospital of St John was a major landowner and a significant political presence in most European states. It was also a leading player in the settlements established in the Levant in the wake of the crusades. It survives today. In this source-based and up-to-date account of its activities and internal history in the first two centuries of its existence, attention is particularly paid to the lives of the brothers and sisters who made up its membership and were professed religious. Themes in the book relate to the tension that always existed between the Hospital's roles as both a hospitaller and a military order and its performance as an institution that was at the same time a religious order and a great international corporation.
Visa hela texten

'I think this is an excellently clear book and results from an original vision of the subject; it will obviously be the new standard work' - Dr Anthony Luttrell, Honorary Research Fellow, Royal Holloway College '...impressive and substantial...' - Robert Irwin, Literary Review

Bloggat om The Knights Hospitaller in the Levant, c....

JONATHAN RILEY-SMITH'S first university post was in the Department of Medieval History at the University of St Andrews, Scotland. In 1972 he returned to the Faculty of History in the University of Cambridge before being appointed Professor of History at Royal Holloway College, University of London in 1978. From 1994 to 2005 he was Dixie Professor of Ecclesiastical History in Cambridge. He is a Knight of Justice of The Most Venerable Order of St John and a Knight Grand Cross of Grace and Devotion of the Sovereign Military Order of Malta. He is the sole author of eleven books, including The Knights of St John in Jerusalem and Cyprus, c.1050-1310 (1967), The Feudal Nobility and the Kingdom of Jerusalem, 1174-1277 (1973), What Were the Crusades? (1977, 4th edition 2009), The First Crusade and the Idea of Crusading (1986), The Crusades: A History (1987, 2nd edition 2005), The First Crusaders, 1095-1131 (1997), The Crusades, Christianity and Islam (2008) and Templars and Hospitallers as Professed Religious in the Holy Land (2010).

List of Abbreviations Explication and Acknowledgements Prologue PART I: INCEPTION Origins, c.1070-1160 Militarization, 1126-1182 Reaching Maturity, 1177-1206 The Order and the Politics of the Latin East, 1201-1244 PART II: THE MISSION Nursing the Sick and Burying the Dead Defending Christians PART III: THE ORDER Members Conventual Life The Master, his Convent and the Chapter General The Conventual Bailiffs and their Departments PART IV: ASSETS An Exempt Order of the Church The Estate in the Levant Provincial Government and the Estate in Europe PART V: THE END OF THE BEGINNING The Loss of the Mainland, 1244-1291 Interlude on Cyprus, 1291-1309 Epilogue Appendix: Masters of the Hospital Bibliography Index