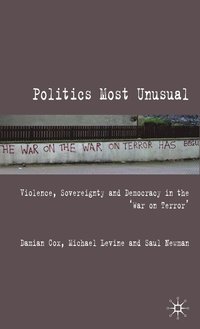 Violence, Sovereignty and Democracy in the `War on Terror'

av Damian Cox, Michael P Levine, Saul Newman
Inbunden Engelska, 2008-12-11
1079
Köp
Spara som favorit
Skickas inom 10-15 vardagar.
Fri frakt inom Sverige för privatpersoner.
Finns även som
Visa alla 2 format & utgåvor
How has 9/11 and the declaration of the 'global war on terror' changed our conceptions of politics? How has it affected our understanding of democracy, personal freedom and government accountability? In answering these and other questions, the authors engage in a comprehensive and critical analysis of politics in the age of terrorism.
Visa hela texten

'Politics Most Unusual is a significant contribution to the substantial literature taking a broadly 'critical' perspective on the nature of post-9/11 politics. Its key strength is the engagement with a psychoanalytic approach to understanding the nature and significance of neglected aspects of religion and prejudice in contemporary political life and the ways in which 'spin', dissimulation and straightforward lying have ceased to be the mortal sins of politics that they once were. The authors deserve credit for this significant contribution to debate in this field.' John Williams, Contemporary Political Theory

DAMIAN COX is Assistant Professor of Philosophy at Bond University, Australia. His publications include Integrity and the Fragile Self (2003, co-authored); and articles in metaphysics, epistemology, value theory, environmental ethics, philosophical psychology, and moral theory. MICHAEL LEVINE is Professor of Philosophy at the University of Western Australia. Recent publications include Integrity and the Fragile Self (2003, co-authored); Racism in Mind (2003, co-edited), The Analytic Freud (editor); and articles on moral psychology, philosophy of religion, history of philosophy, metaphysics, and philosophy and architecture. SAUL NEWMAN is Reader in Political Theory at Goldsmiths, University of London, UK. His research is in continental political theory, radical politics, and the politics of violence, terrorism and security. He is the author of From Bakunin to Lacan (2001); Power and Politics in Poststructuralist Thought (2005) Unstable Universalities (2007), as well as numerous journal articles.

Preface The Politics of Security Religion, Prejudice, Violence and Politics Lying in the War on Terrorism Sovereignty, Violence and the State of Exception American Empire and its Discontents The Lesser of Two Terrors: Ethical Questions On Ways Forward Index