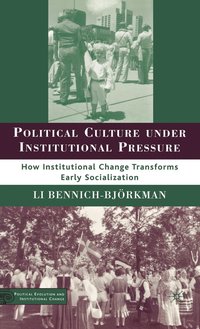 'Li Bennich-Bjoerkman's Political Culture under Institutional Change is a major addition to our knowledge about the interaction of culture and institutions as well as to our understanding of politics and social values in transition countries. Bennich-Bjoerkman focuses on Estonia, which had close social and cultural ties to Sweden and Finland prior to its incorporation in the Soviet Union, and which has had one of the most successful transitions from Communism in more recent years. This is a very important story. Bennich-Bjoerkman tells it with elegant prose and with great theoretical sophistication. It will have a great and lasting impact across a variety of fields.' -Eric Uslaner, Professor of Government and Politics, University of Maryland, College Park, USA 'How can we study the effects of culture and socialization on political values and behaviour? Li Bennich-Bjoerkman presents a methodologically innovative answer to this question by comparing Estonians in three different geographic and social settings. This book presents not only a wealth of information about Estonians in the 20th century, but also a systematic approach to one of the biggest questions in political science.' -Vello Pettai, Professor of Comparative Politics, University of Tartu, Estonia

Socialized Culture and Institutional Change: Introducing the Discussion The Context of Early Socialization: Estonia between the Two Wars Multicultural Canada and the Welfare State Sweden: Home to Estonians in Exile Did Civic Commitment Survive Communism? Political Culture under Institutional Pressure