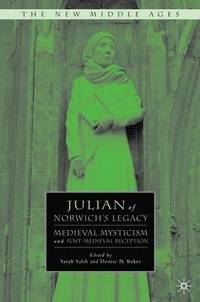 av Sarah Salih, Denise Nowakowski Baker
Inbunden Engelska, 2009-12-18
1349
Köp
Spara som favorit
Skickas inom 10-15 vardagar.
Fri frakt inom Sverige för privatpersoner.
Julian of Norwich the best-known of the medieval mystics today. The text of her Revelation has circulated continually since the fifteenth century, but the twentieth century saw a massive expansion of her popularity. Theological or literary-historical studies of Julian may remark in passing on her popularity, but none have attempted a detailed study of her reception. This collection fills that gap: it outlines the full reception history from the extant manuscripts to the present day, looking at Julian in devotional cultures, in modernist poetry and present-day popular literature, and in her iconography in Norwich, both as a pilgrimage site and a tourist attraction.
Visa hela texten

"This is one of the best collections of essays I have encountered in recent years. The organizing concept is compelling and superbly executed. Every essay is a good fit for the collection, and the essays speak to each other while avoiding repetition. Not only is this volume of value to students and scholars of medieval literature and medievalism, but it should also be required reading for all would-be editors of collections of essays." - Medieval Feminist Forum "This exciting collection of essays opens up new directions in both medieval studies and studies in medievalism, bringing much-needed rigour to the latter, and putting to work the often advocated but seldom practiced notion that medieval texts are created in their re-reading and reconstruction as much as in their original contexts of production. The collection will be essential to students and scholars of Julian of Norwich but also of interest to anyone in Middle English studies concerned with new approaches to historicism, close reading, and relations between the medieval past and modernity. Julian of Norwich's Legacy, consisting of essays by both senior scholars and newer talents, is exemplary in its use of cultural studies within medieval studies." - David Matthews, University of Manchester "Just when we thought there was little more to be said about the medieval woman writer, Julian of Norwich, this volume provides an important and exciting new approach to the author, her work and her audiences since the production of her two texts over six hundred years ago. By focusing on Julian s post-medieval reception in particular, Julian of Norwich s Legacy demands a rethinking of the academic labels generally attached to her as writer, mystic or theologian, asking us instead to consider her in terms of constantly evolving symbol or malleable hermeneutic. As such, we are presented with a multiplicity of Julians who are reworked and reinvented according to the needs, interests and requirements of an ever-changing audience and its attempts to understand the contingencies of the modern moment . In this way Julian of Norwich s Legacy not only fills a major gap within contemporary Julian Studies but also speaks cogently to and about those approaching Julian of Norwich from outside the academy." - Liz Herbert McAvoy, Senior Lecturer in Gender in English Studies and Director of the Centre for Medieval and Early Modern Research, Swansea University and author of Authority and the Female Body in the Writings of Julian of Norwich and Margery Kempe.

SRARAH SALIH is Senior Lecturer in English at King's College London, UK. DENISE N. BAKER is Professor of English and Associate Dean of the College of Arts and Sciences at the University of North Carolina at Greensboro, USA.