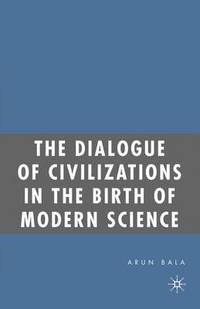 The Dialogue of Civilizations in the Birth of Modern Science

"Readers interested in multicultural scientific contributions before Galileo will enjoy this book immensely . . . Highly recommended." - Choice"What Bala and others are offering is a view of history very different from the one Westerners are taught . . . Love it or hate it, our world is neither the exclusive heritage of the West nor is it something the West has imposed on the rest of the world, as reactionary fundamentalists insist. Rather, it is the result of a dialogue of civilizations - the efforts of very different people, in different places, coming together to share their curiosity about the world and their common interest in understanding and improving it." - The Toronto Star"Erudite . . . What Bala has conclusively demonstrated is that the Scientific Revolution could not have been accomplished in early modern Europe on the basis of ancient Greek ideas alone." - Literary Review of Canada"Bala's book is a marvelous combination of high speculation and deep rigor. From astronomy to mathematics, no one, after the work of Needham and others, could doubt the significant contributions of non-Western cultures (Arab, Chinese, Egyptian, Indian) to the making of modern science. But the nature of those contributions has often been misunderstood, and even the most sympathetic multiculturalists frequently fail to grasp the main message of the ongoing dialogue. The great value of Bala's work consists in the careful attention to detail applied to some strikingly novel ideas. Modern science, its past and its prospects have come into sharper focus." - James Robert Brown, author of Who Rules in Science: An Opinionated Guide to the Wars"The major strength of this book is its convincing demonstration that modern science is neither the unique product of Europe nor a process of merely grafting insights from diverse cultures onto a body of growing knowledge . . . This book is a sustained and closely argued narrative where the style of the author is characterized by occasional wit and verve." - George Gheverghese Joseph, author of the best-selling The Crest of the Peacock: Non-European Roots of Mathematics "Bala's provocative and challenging thesis that the roots of modern science are multicultural and dialogical is well argued, lucidly written, and deserves to be read not only by specialist scholars, but even more importantly, by the intelligent lay public." - Keekok Lee, Honorary Chair in Philosophy, Institute for Philosophy and Public Policy, University of Lancaster "This provocative and wide-ranging book challenges the idea that the birth of modern science is a uniquely European cultural achievement. In tracing how Indian mathematics, Arabic astronomy and Chinese science may all have contributed to the Copernican revolution, Bala sets a challenge for Eurocentric historians of science: either refute his plausible conjectures, or give up the self-congratulatory idea that modern science is the product of a specifically Western vision. With its easy style and wide coverage, this book sets a new research agenda for historical and comparative studies of science." - Andrew Brennan, Chair of Philosophy, La Trobe University"An eye opener, it also ofers an alternative account by arguing that the genesis of modern science cannot be explained adequately without recourse to admission of a dialogical interaction with non-Western traditions of science associated with four streams of civilization: Egyptian, Arabic, Indian, and Chinese...This well-argued book is a welcome addition to the literature on the history of science and religion." - Abrahim H. Khan, Trinity College, Toronto School of Theology"I found this book a provocative and worthwhile read. It could also serve as a useful source to sensitize advanced students to the enormous difficulties of distinguishing between parallel developments, unidirectional influences and cultural dialogues." - Klaus Hentsch

Bloggat om The Dialogue of Civilizations in the Birt...

ARUN BALA is a visiting professor at the University of Toronto in Canada.