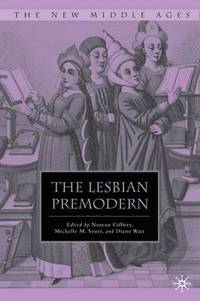 A Historical and Literary Dialogue

"The editors of The Lesbian Premodern have gathered here the work of some of the most prominent and accomplished scholars of pre- and early modern female sexualities. In the brilliantly conceived and executed latter part of the book they bring provocative scholars of later periods into conversation with this medieval and early modern scholarship. The result is a dynamic interrogation of fundamental concepts, demonstrating vividly how this pre- and early modern material impacts the entire field." - Carolyn Dinshaw, New York University "It has been the case for some time now that the most rigorous and mind-bending queer scholarship focuses on medieval and early modern sexualities. This collection represents what is best in this work, and clears the way for an open-ended conversation across periods. Prepare to be schooled in the pleasures of anachronism." - Heather Love, University of Pennsylvania "The Lesbian Premodern's editors have collected a rich and flexible set of texts that speak to and out of myriad sources to discover sites where same-sex desire might be discerned in small gaps in the history of the inaudible . . . The Lesbian Premodern's daring derives from its editors' purposeful gathering of texts that tangle temporalities to make a nonmodern lesbian - italics and quotation mark free - typographically possible." - Michele Aina Barale, Amherst College "The Lesbian Premodern is a stunning achievement in laying the groundwork for a long overdue transhistorical sexuality studies, one that does not assume simplistic diachronicities between the past and present, but which instead tracks and problematizes the complex and untimely traffic between 'Then' and 'Now' . . . . What emerges is a potent and unprecedented framework for the writing of new lesbian histories and theories, as well as the forging of new relational virtualities between scholars who might otherwise never 'hook up'." - Eileen A. Joy, editor of postmedieval: a journal of medieval cultural studies and Lead Ingenitor, BABEL Working Group

Noreen Giffney is a research coordinator in the Graduate Research and Education Programme in Gender, Culture, and Identity in the Humanties Institute at the University College Dublin, Ireland.