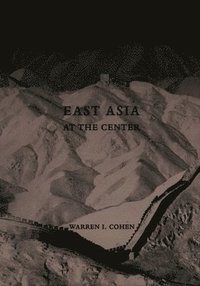 East Asia at the Center

Four Thousand Years of Engagement with the World

av Warren I Cohen
Inbunden Engelska, 2000-12-01
699
Köp
Spara som favorit
Finns även som
Visa alla 2 format & utgåvor
A common misconception holds that Marco Polo "opened up" a closed and recalcitrant "Orient" to the West. However, this sweeping history covering 4,000 years of international relations from the perspective of China, Japan, Korea, and Southeast Asia shows that the region's extensive involvement in world affairs began thousands of years ago. In a time when the writing of history is increasingly specialized, Warren I. Cohen has made a bold move against the grain. In broad but revealing brushstrokes, he paints a huge canvas of East Asia's place in world affairs throughout four millennia. Just as Cohen thinks broadly across time, so too, he defines the boundaries of East Asia liberally, looking beyond China, Japan, and Korea to include Southeast Asia. In addition, Cohen stretches the scope of international relations beyond its usual limitations to consider the vital role of cultural and economic exchanges. Within this vast framework, Cohen explores the system of Chinese domination in the ancient world, the exchanges between East Asia and the Islamic world from the thirteenth to the seventeenth centuries, and the emergence of a European-defined international system in the eighteenth and nineteenth centuries. The book covers the new imperialism of the 1890s, the Manchurian crisis of the early 1930s, the ascendancy of Japan, the trials of World War II, the drama of the Cold War, and the fleeting "Asian Century" from the mid-1970s to the mid-1990s. East Asia at the Center is replete with often-overlooked or little-known facts, such as: * A record of persistent Chinese imperialism in the region * Tibet's status as a major power from the 7th to the 9th centuries C.E., when it frequently invaded China and decimated Chinese armies * Japan's profound dependence on Korea for its early cultural development * The enormous influence of Indian cuisine on that of China * Egyptian and Ottoman military aid to their Muslim brethren in India and Sumatra against European powers * Extensive Chinese sea voyages to Arabia and East Africa-long before such famous Westerners as Vasco da Gama and Christopher Columbus took to the seas East Asia at the Center's expansive historical view puts the trials and advances of the past four millennia into perspective, showing that East Asia has often been preeminent on the world stage-and conjecturing that it might be so again in the not-so-distant future.
Visa hela texten

A superb and readable introduction to the region's history. Foreign Affairs Extremely ambitious... Cohen plunges right in with enviable bravado and scope. China Quarterly Stimulating and informative. Library Journal A detailed, general-reader overview of everything below Siberia and above the Himalayas, plus the offshore archipelagos and the march of Islam. With maps, time-lines and celebrity lists; without partisanship...East Asia at the Center is an intellectual feat. -- James H. Bready Baltimore Sun [Cohen] has attempted the impossible with East Asia at the Center and largely succeeded. His book is an absorbing corrective to the Eurocentric view that dominates most thinking about the world. The Japan Times I recommend that all who are curious about or who have a professional interest in East Asia read this book. -- Lewis Bernstein Military Review A successful attempt to rpovide a useful aid to students in "area studies". -- Andrea Campana Acta Koreana

Warren I. Cohen is Distinguished University Professor of History at University of Maryland Baltimore County (UMBC) and Senior Scholar at the Woodrow Wilson International Center for Scholars. His publications include The Cambridge History of American Foreign Relations: America in the Age of Soviet Power, 1945-1991, East Asian Art in American Culture (Columbia), and America's Response to China: A History of Sino-American Relations (Columbia).

Preface 1. The Emergence of an International System in East Asia In the beginning there was China Other rooms, other voices Empire of the Han, challenge of the Xiongnu The diffusion of power China Korea Japan Southeast Asia Conclusion 2. Shadows over Tang Splendor The Sui The Years of Tang Ascendance Korea, Japan, and Southeast Asia 3. East Asia Uncentered Late Tang The Tibetan Factor The demise of the Tang Dynasty Northeast Asia Southeast Asia The Song reunify China Koryo Japan Southeast Asia in Turmoil Conclusion 4. The Mongol Ascendancy Chinggis Khan and his sons Khubilai Khan and the Chinese Asian Resistance to Khubilai as Universal Ruler The last days of the Yuan Conclusion 5. The Resurgence of Chinese Power and the Coming of Islam Rise of the Ming Koreans, Japanese, and Ryukyu Islanders Southeast Asia and the spread of Islam Ming China on the eve of the Portuguese intrusion Conclusion 6. Europe and Japan Disrupt the East Asian International Order Arrival of the Portuguese The Ming under Siege The Rise of Japanese Power Other Europeans: The Arrival of the Dutch and the English Southeast Asia: Magnet for the West Last Days of the Ming Conclusion 7. The Great Qing Empire Rebuilding of the "Chinese" empire Japan and Korea Southeast Asia in flux Approach of the British empire Conclusion 8. Triumph of the West The British are coming The Yanks are coming France's quest for glory Russia as a Pacific power And then there were the Dutch Conclusion 9. The Ascendance of Japan Restoration and self-strengthening in China The Meiji Restoration Japan ascendant The United States as an East Asian Power The Boxer War In the light of the Rising Sun Conclusion 10. Challenge to the West Development of the Japanese empire The Rise of Chinese nationalism Nationalism elsewhere in East Asia Washington and Moscow look to East Asia Nationalist revolution in China Crisis in Manchuria 11. War and Decolonization, 1932-1949 In the beginning it was Manchuria China imperiled War comes to Asia Japan's Greater East Asia Co-prosperity Sphere The war ends in East Asia Decolonization in Southeast Asia Conclusion 12. The Cold War in Asia The occupation of Japan Revolution in China War in Korea Southeast Asia and the Cold War China, Taiwan, and the United States Conclusion 13. The Resurgence of East Asian Economic Power Japan as # 1 Little Dragons Southeast Asia China joins the world market economy The Japan that can say no Conclusion 14. On the Eve of the 21st Century Disaster at Tiananmen Democracy comes to Taiwan The Korean peninsula: democracy and nuclear weapons Red star over Hong Kong Crisis in Southeast Asia Conclusion Closing Thoughts Further Reading Index