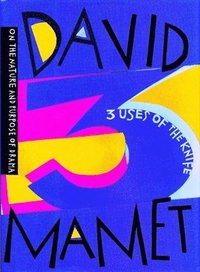 Three Uses of the Knife

On the Nature and Purpose of Drama

av David Mamet
Inbunden Engelska, 1997-12-01
329
Köp
Spara som favorit
Skickas inom 5-8 vardagar.
Fri frakt inom Sverige för privatpersoner.
Finns även som
Visa alla 5 format & utgåvor
What makes good drama? How does drama matter in our lives? In Three Uses of the Knife, one of America's most respected writers reminds us of the secret powers of the play. Pulitzer Prize-winning playwright, screenwriter, poet, essayist, and director, David Mamet celebrates the absolute necessity of drama-and the experience of great plays-in our lurching attempts to make sense of ourselves and our world. In three tightly woven essays of characteristic force and resonance, Mamet speaks about the connection of art to life, language to power, imagination to survival, the public spectacle to the private script. It is our fundamental nature to dramatize everything. As Mamet says, "Our understanding of our life, of our drama...resolves itself into thirds: Once Upon a Time...Years Passed...And Then One Day." We inhabit a drama of daily life-waiting for a bus, describing a day's work, facing decisions, making choices, finding meaning. The essays in the book are an eloquent reminder of how life is filled with the small scenes of tragedy and comedy that can be described only as drama. First-rate theater, Mamet writes, satisfies the human hunger for ordering the world into cause-effect-conclusion. A good play calls for the protagonist "To create, in front of us, on the stage, his or her own character, the strength to continue. It is her striving to understand, to correctly assess, to face her own character (in her choice of battles) that inspires us-and gives the drama power to cleanse and enrich our own character." Drama works, in the end, when it supplies the meaning and wholeness once offered by magic and religion-an embodied journey from lie to truth, arrogance to wisdom. Mamet also writes of bad theater; of what it takes to write a play, and the often impossibly difficult progression from act to act; the nature of soliloquy; the contentless drama and empty theatrics of politics and popular entertainment; the ubiquity of stage and literary conventions in the most ordinary of lives; and the uselessness, finally, of drama-or any art-as ideology or propaganda.
Visa hela texten

One of America's leading living playwrights has crafted three short essays beginning iwth the premise that it is 'our nature to dramatize'...It will be compelling to students of theater and serves as a good companion to Mamet's advice to actors, True and False. Library Journal

David Mamet is the author of the plays Oleanna; Glengarry Glen Ross, for which he won a Pulitzer Prize and a New York Drama Critics Circle Award; Speed the Plow; and Sexual Perversity in Chicago, among others. His films include, as screenwriter, The Postman Always Rings Twice, The Verdict, The Untouchables, The Edge, and Wag of the Dog, and as writer/director, House of Games, Homicide, Things Change, and The Spanish Prisoner. He is also the author of children's books and four books of essays, Writing in Restaurants, Some Freaks, The Cabin, and Make Believe Town; two novels, The Village and The Old Religion and a book on acting, True and False.

One the Wind-Chill Factor The Perfect Ball Game Anti-Stratfordianism The Problem Play Letters of Transit Two. Second Act Problems Violence Self-Censorship Three. Three Uses of the Knife The Eleven O'Clock Song The End of the Play