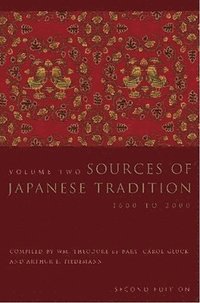 From Earliest Times to 1600

av Wm Theodore De Bary, Carol Gluck, Arthur Tiedemann
Inbunden Engelska, 2001-04-01
1269
Köp
Spara som favorit
Specialorder (osäker tillgång). Skickas inom 11-20 vardagar.
Fri frakt inom Sverige för privatpersoner.
Finns även som
Visa alla 2 format & utgåvor
Sources of Japanese Tradition is a best-selling classic, unrivaled for its wide selection of source readings on history, society, politics, education, philosophy, and religion in the Land of the Rising Sun. In this long-awaited second edition, the editors have revised or retranslated most of the texts in the original 1958 edition, and added a great many selections not included or translated before. They have also restructured volume 1 to span the period from the early Japanese chronicles to the end of the sixteenth century. New additions include: * readings on early and medieval Shinto and on the tea ceremony, * readings on state Buddhism and Chinese political thought influential in Japan, and * sections on women's education, medieval innovations in the uses of history, and laws and precepts of the medieval warrior houses. Together, the selections shed light on the development of Japanese civilization in its own terms, without reference to Western parallels, and will continue to assist generations of students and lay readers in understanding Japanese culture.
Visa hela texten

The long awaited second edition, with new contributions reflecting who's who in the field, adds new readings and revisions for a more balanced perspecitve... Sources lives again as a useful introduction that "lets the Japanese speak for themselves." Religious Studies Review I am a fan of Volume One of Sources of Japanese Tradition... The daunting task of revisiting such a classic was skillfully handled by the editors. Japanese Journal of Religious Studies

Wm. Theodore de Bary is John Mitchell Mason Professor Emeritus and Provost Emeritus of Columbia University, and currently holds the title of Special Service Professor. He has written extensively on Confucianism in East Asia, and is editor of the first editions of Sources of Chinese Tradition and Sources of Japanese Tradition (both published by Columbia). Donald Keene is Shincho Professor of Japanese Literature and University Professor Emeritus at Columbia. He is author, editor, or translator of more than thirty books of criticism and works of literature. George Tanabe is Chair of the Department of Religion at the University of Hawaii. He is editor of Religions of Japan in Practice (Princeton Readings in Religions), co-editor of Practically Religious : Worldly Benefits and the Common Religion of Japan, and other books. Paul Varley is Professor of History at the University of Hawaii and author of Japanese Culture (Hawaii), Warriors of Japan: As Portrayed in the War Tales, and other books.

Part 1: Early Japan 1. The Earliest Records of Japan 2. Early Shinto 3. Prince Shotoku and His Constitution 4. Chinese Thought and Institutions in Early Japan 5. Nara Buddhism Part 2: Mahayana Universalism and the Sense of Hierarchy 6. Saicho and Mt. Hiei (Ryusaku Tsunoda and Paul Groner) 7. Kukai and Esoteric Buddhism 8. The Spread of Esoteric Buddhism 9. The Vocabulary of Japanese Aesthetics I 10. Amida, the Pure Land, and the Response of the Old Buddhism to the New 11. New Voices of History (Paul Varley) 12. The Way of the Warrior (Paul Varley) 13. Nichiren: The Sun and the Lotus (Philip Yampolsky) 14. Zen Buddhism (William Bodiford) 15. Shinto in Medieval Japan 16. The Vocabulary of Japanese Aesthetics II 17. Women's Education 18. Law and Precepts for the Warrior Houses (Paul Varley) 19. The Regime of the Unifiers (Jurgis S. A. Elisonas)