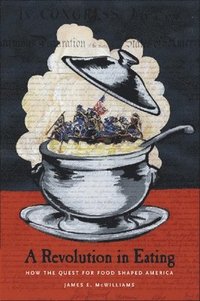 A Revolution in Eating

How the Quest for Food Shaped America

av James McWilliams
Häftad Engelska, 2007-11-01
229
Köp
Spara som favorit
Skickas inom 5-8 vardagar.
Fri frakt inom Sverige för privatpersoner.
Finns även som
Visa alla 2 format & utgåvor
Sugar, pork, beer, corn, cider, scrapple, and hoppin' John all became staples in the diet of colonial America. The ways Americans cultivated and prepared food and the values they attributed to it played an important role in shaping the identity of the newborn nation. In A Revolution in Eating, James E. McWilliams presents a colorful and spirited tour of culinary attitudes, tastes, and techniques throughout colonial America. Confronted by strange new animals, plants, and landscapes, settlers in the colonies and West Indies found new ways to produce food. Integrating their British and European tastes with the demands and bounty of the rugged American environment, early Americans developed a range of regional cuisines. From the kitchen tables of typical Puritan families to Iroquois longhouses in the backcountry and slave kitchens on southern plantations, McWilliams portrays the grand variety and inventiveness that characterized colonial cuisine. As colonial America grew, so did its palate, as interactions among European settlers, Native Americans, and African slaves created new dishes and attitudes about food. McWilliams considers how Indian corn, once thought by the colonists as "fit for swine," became a fixture in the colonial diet. He also examines the ways in which African slaves influenced West Indian and American southern cuisine. While a mania for all things British was a unifying feature of eighteenth-century cuisine, the colonies discovered a national beverage in domestically brewed beer, which came to symbolize solidarity and loyalty to the patriotic cause in the Revolutionary era. The beer and alcohol industry also instigated unprecedented trade among the colonies and further integrated colonial habits and tastes. Victory in the American Revolution initiated a "culinary declaration of independence," prompting the antimonarchical habits of simplicity, frugality, and frontier ruggedness to define American cuisine. McWilliams demonstrates that this was a shift not so much in new ingredients or cooking methods, as in the way Americans imbued food and cuisine with values that continue to shape American attitudes to this day.
Visa hela texten

The lucid style and jaunty tone...make this accessible to all. Publishers Weekly Delicious from start to finish. Kirkus Reviews Meticulously researched and packed with fascinating detail, this book provides an excellent account of the culinary development of Colonial America. Library Journal A Revolution in Eating, a lively new tour of Colonial American 'foodways.' -- Joshua Glenn Boston Globe Flexibility, even tolerance may well have contributed to the uniqueness of American food, according to historian McWilliams in this extremely rich, readable book. The FOOD Museum Online Fascinating...Anyone curious about the cultural history of that meatloaf on the dinner plate will gobble it up. -- Tina Jordan Entertainment Weekly McWilliams presents a colorful and spirited tour of culinary attitudes, tastes, and techniques through out colonial America. Staten Island Star Reporter McWilliams's examination of the culinary history of Colonial America is more than a... gastronomic tour... A lively and informative read. New Yorker [A] fresh perspective is well worth the read. Instead of learning our origins through a well-worn trail of war and peace on a time line, it takes us on a more pleasant route from pewter spoon to mouth. -- Shelley Preston Ledger A Revolution in Eating gives its readers much to chew over, and whets the appetite for further work on the development of American Cooking. -- Claire Hopley The Washington Times McWilliams has penned an illuminating account of the evolution of foodways in the colonial Americas. -- Josh Friedland Washington Post Book World Pleasingly filling. -- Susannah Meadows New York Times Book Review For the cook who likes history or the history buff who likes to cook. -- Linda Bassett Georgetown Record McWilliams vividly illustrates the intimate knowledge and relationship colonial Americans had with their food. -- Claudia Kousoulas Books-for-cooks.com: Appetite for Books McWilliam's perspective... provides an essential link from the past to the present and into the future. It's a fascinating foray. Dona's Kitchen Kapers McWilliams manages to be simultaneously instructive and entertaining. -- MM Pack Austin Chronicle McWilliams brings colonial times to life through vivid detail. -- William R. Wood Kalamazoo Gazette Don't let the fact that its publisher is Columbia University Press fool you into thinking this is a book for scholars only. -- Margot Cleary Daily Hampshire Gazette McWilliams manages to show food and drink as an integral part of history... Recommended. Choice [An] exciting work of comparative colonial history. Journal of Popular Culture McWilliams has contributed a valuable book to early American history. -- Michael A. LaCombe The Journal of Southern History A lively investigation of Colonial eating habits and how they shaped the revolutionary views of the new Americans. -- Paulette Beete American Spirit

Bloggat om A Revolution in Eating

James E. McWilliams is associate professor of history at Texas State University-San Marcos. His articles have appeared in The New York Times, The Los Angeles Times, and The Washington Post, among other publications, and he is the author of Building the Bay Colony: Local Economy and Society in Early Massachusetts.

Introduction: Getting to the Guts of American Food 1. Adaptability: The Bittersweet Culinary History of the English West Indies 2. Traditionalism: The Greatest Accomplishment of Colonial New England 3. Negotiation: Living High and Low on the Hog in the Chesapeake Bay Region 4. Wilderness: The Fruitless Search for Culinary Order in Carolina 5. Diversity: Refined Crudeness in the Middle Colonies 6. Consumption: The British Invasion 7. Intoxication: Finding Common Bonds in an Alcoholic Empire 8. Revolution: A Culinary Declaration of Independence