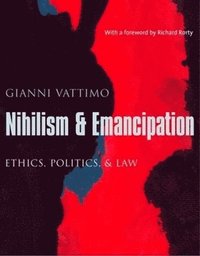 av Gianni Vattimo, Santiago Zabala
Häftad Engelska, 2007-02-01
257
Köp
Spara som favorit
Finns även som
Visa alla 1 format & utgåvor
A daring marriage of philosophical theory and practical politics, this collection is the first of Gianni Vattimo's many books to combine his intellectual pursuits with his public and political life. Vattimo is a paradoxical figure, at once a believing Christian and a vociferous critic of the Catholic Church, an outspoken liberal but not a former communist, and a recognized authority on Nietzsche and Heidegger as well as a prominent public intellectual and member of the European parliament. Building on his unique position as a philosopher and politician, Vattimo takes on some of the most pressing questions of our time: Is it still possible, long after Nietzsche proclaimed the death of God, to talk of moral imperatives, individual rights, or political freedom? Are these values still relevant in today's world? Tackling these crucial issues, Gianni Vattimo argues that nihilism is not the absence of meaning but a recognition of a plurality of meanings; it is not the end of civilization but the beginning of new social paradigms. Commonly associated with the pessimistic belief that all of existence is meaningless, nihilism, as a philosophical principle, is far less sensational-it is the ethical doctrine that there are no moral absolutes or infallible natural laws, that "truth" is inescapably subjective. Because the conditions for equality and liberty are not "naturally" given, society must actively create these ideals or it will inevitably fall prey to irrationality, prejudice, and oppression. Vattimo contends that the infighting, timidity, and confusion that have overtaken contemporary liberal thought and politics are the products a prolonged and indulgent mourning over the loss of the transcendental father figure-any institution or power structure that defines truth, knowledge, and reality. Until humanity overcomes its need for external authority-whether it be organized religion, the nation-state, or free-market capitalism-emancipation will remain unattainable. Collecting fourteen of Vattimo's most influential essays on ethics, politics, and law, Nihilism and Emancipation is a provocative reevaluation of meaning, values, and the idea of freedom in Western culture.
Visa hela texten

The fluid writing and the translator's "invisible" inclusion of explanatory phrases...makes this accessible to undergraduate and lay readers, as well as of interest to scholars...Highly recommended. Library Journal

Gianni Vattimo is emeritus professor of philosophy at the University of Turin and a member of the European Parliament. His books with Columbia University Press are Christianity, Truth, and Weakening Faith: A Dialogue (with Rene Girard), Not Being God: A Collaborative Autobiography, Art's Claim to Truth, After the Death of God, Dialogue with Nietzsche, The Future of Religion (with Richard Rorty), Nihilism and Emancipation: Ethics, Politics, and the Law, and After Christianity. Richard Rorty has taught at Wellesley, Princeton, the University of Virginia, and Stanford. With Gianni Vattimo, he is the author of The Future of Religion.Santiago Zabala is ICREA Research Professor at the University of Barcelona. He is the author of The Remains of Being: Hermeneutic Ontology After Metaphysics and The Hermeneutic Nature of Analytic Philosophy: A Study of Ernst Tugendhat; editor of Art's Claim to Truth, Weakening Philosophy, and The Future of Religion; and coeditor (with Jeff Malpas) of Consequences of Hermeneutics. William McCuaig is a translator living in Toronto.

Foreword by Richard Rorty Editor's Preface Introduction Part I. Ethics 1. Postmodernity, Technology, Ontology 2. Philosophy and the Decline of the West 3. Ethics of Provenance 4. Liberty and Peace in the Postmodern Condition 5. Ethics Without Transcendence? 6. Pain and Metaphysics Part II. Politics 7. Philosophy, Metaphysics, Democracy 8. Hermeneutics and Democracy 9. A project for the Left 10. Socialism, in Other Words Europe 11. Globalization and the Relevance of Socialism Part III. Law 12. Doing the Law Justice 13. An Apology for Proceduralism 14. On the Externality of Crimes and Punishments Notes Bibliography Index