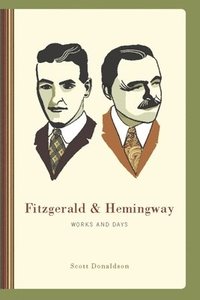 av Scott Donaldson
Inbunden Engelska, 2009-06-30
659
Köp
Spara som favorit
Skickas inom 7-10 vardagar.
Fri frakt inom Sverige för privatpersoner.
Finns även som
Visa alla 2 format & utgåvor
F. Scott Fitzgerald and Ernest Hemingway might have been contemporaries, but our understanding of their work often rests on simple differences. Hemingway wrestled with war, fraternity, and the violence of nature. Fitzgerald satirized money and class and the never-ending pursuit of a material tomorrow. Through the provocative arguments of Scott Donaldson, however, the affinities between these two authors become brilliantly clear. The result is a reorientation of how we read twentieth-century American literature. Known for his penetrating studies of Fitzgerald and Hemingway, Donaldson traces the creative genius of these authors and the surprising overlaps among their works. Fitzgerald and Hemingway both wrote fiction out of their experiences rather than about them. Therefore Donaldson pursues both biography and criticism in these essays, with a deep commitment to close reading. He traces the influence of celebrity culture on the legacies of both writers, matches an analysis of Hemingway's Spanish Civil War writings to a treatment of Fitzgerald's left-leaning tendencies, and contrasts the averted gaze in Hemingway's fiction with the role of possessions in The Great Gatsby. He devotes several essays to four novels, Gatsby, Tender Is the Night, The Sun Also Rises, and A Farewell to Arms, and others to lesser-known short stories. Based on years of research in the Fitzgerald and Hemingway archives and brimming with Donaldson's trademark wit and insight, this irresistible anthology moves the study of American literature in bold new directions.
Visa hela texten

Reading these learned and accessible essays, one is struck anew by Scott Donaldson's kinship with the authors he studies. From these great prose stylists, he inherits a gift for crisp, clear prose, wry humor, and an unerring eye for the telling anecdote. Few match either Donaldson's broad knowledge of his subjects or the affable critical clarity he brings to his readings of their lives and texts. -- Jennie Kassanoff, Barnard College What a pleasure it is to have Scott Donaldson's clear-eyed, insightful, and above all gracefully written essays on F. Scott Fitzgerald and Ernest Hemingway available in one volume. His many years as a careful and attentive reader, his knowledge of the relevant scholarship, and his command of unpublished manuscripts and letters are apparent on every page. -- Jackson R. Bryer, University of Maryland Well-researched and masterfully written. Library Journal Two very influential American writers are made more approachable through the means of brilliant biography. -- Bill O'Donovan Virginia Gazette Splendid, erudite. Los Angeles Times Provides an essential collection of essays for easy reference. Hemingway Review Donaldson's work is impeccably researched and continually relevant to the critical conversations that swirl through Fitzgerald/Hemingway studies. -- Michael D. Dubose F. Scott Fitzgerald Review As evidenced by Fitzgerald and Hemingway: Works and Days, Donaldson continues to show himself as a beacon in American literary scholarship, a major voice with 'an awareness of the interconnectedness between biography and criticism.' -- Joseph Fruscione American Literary Scholarship

Scott Donaldson is one of the nation's leading literary biographers. His books include the acclaimed Edwin Arlington Robinson: A Poet's Life and Archibald MacLeish: An American Life, which won the Ambassador Book Award for biography. His other works are Poet in America: Winfield Townley Scott; By Force of Will: The Life and Art of Ernest Hemingway; Fool for Love: F. Scott Fitzgerald; John Cheever: A Biography; and Hemingway vs. Fitzgerald: The Rise and Fall of a Literary Friendship.

Introduction Part One: The Search for Home 1. St. Paul Boy 2. Fitzgerald's Romance with the South Part Two: Love, Money, and Class 3. This Side of Paradise: Fitzgerald's Coming of Age Novel 4. Possessions in The Great Gatsby: Reading Gatsby Closely 5. The Trouble with Nick: Reading Gatsby Closely 6. Money and Marriage in Fitzgerald's Stories 7. A Short History of Tender Is the Night Part Three: Fitzgerald and His Times 8. Fitzgerald's Nonfiction 9. The Crisis of "The Crack-Up" 10. Fitzgerald's Political Development Part Four: Requiem 11. A Death in Hollywood: F. Scott Fitzgerald Remembered Part Five: Getting Started 12. Hemingway of The Star Part Six: The Craftsman at Work 13. "A Very Short Story" as Therapy 14. Preparing for the End of "A Canary for One" 15. The Averted Gaze in Hemingway's Fiction Part Seven: The Two Great Novels 16. Hemingway's Morality of Compensation 17. Humor as a Measure of Character 18. A Farewell to Arms as Love Story 19. Frederic's Escape and the Pose of Passivity Part Eight: Censorship 20. Censorship and A Farewell to Arms 21. Protecting the Troops from Hemingway: An Episode in Censorship Part Nine: Literature and Politics 22. The Last Great Cause: Hemingway's Spanish Civil War Writing Part Ten: Last Things 23. Hemingway and Suicide 24. Hemingway and Fame Bibliography Index