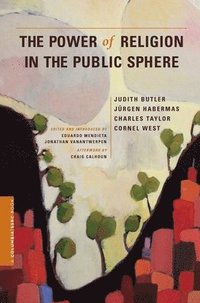 The Power of Religion in the Public Sphere

...topical and timely. European Legacy The book as a whole is an enjoyable read that raises many questions from several perspectives. Each author takes a different stance, followed by a discussion section for their interactions and disputes. -- Robin Alice Roth ID: International Dialogue Very cogent and deftly argued. Muslim World Book Review

Bloggat om The Power of Religion in the Public Sphere

Judith Butler is the Maxine Eliot Professor in the Department of Rhetoric and ComparativeLiterature at the University of California at Berkeley. Her books include Gender Trouble: Feminism and the Subversion of Identity, Antigone's Claim: Kinship Between Life and Death, and Subjects of Desire: Hegelian Reflections in Twentieth-Century France. Jurgen Habermas is a German philosopher and sociologist. His recent works include The Future of Human Nature, The Divided West, and Between Naturalism and Religion: Philosophical Essays. Charles Taylor is a Canadian philosopher and professor emeritus of political science and philosophy at McGill University and a recipient of the Templeton Prize and the Kyoto Prize. His recent books include Varieties of Religion Today: William James Revisited, Modern Social Imaginaries, and A Secular Age. Cornel West is Class of 1943 University Professor at Princeton University, where he teaches in the Center for African American studies and the Department of Religion. His recent books include Democracy Matters: Winning the Fight Against Imperialism and Brother West: Living and Loving Out Loud. Eduardo Mendieta is professor of philosophy at the State University of New York, Stony Brook, and the author of The Adventures of Transcendental Philosophy and Global Fragments: Globalizations, Latinamericanisms, and Critical Theory. Jonathan VanAntwerpen is director of the program on religion and the public sphere at the Social Science Research Council, a visiting scholar at New York University's Institute for Public Knowledge, and coeditor of Varieties of Secularism in a Secular Age. Craig Calhoun is president of the Social Science Research Council and University Professor of the Social Sciences at New York University. His most recent works are Nations Matter: Culture, History, and the Cosmopolitan Dream and an edited collection titled Robert K. Merton: Sociology of Science and Sociology as Science.